I feel more like my real self this week: it’s been a week full of poetry, a week that began with a walk alongside a frozen canal with Amie and the Cockerpoos. I’ll be doing this again later today. 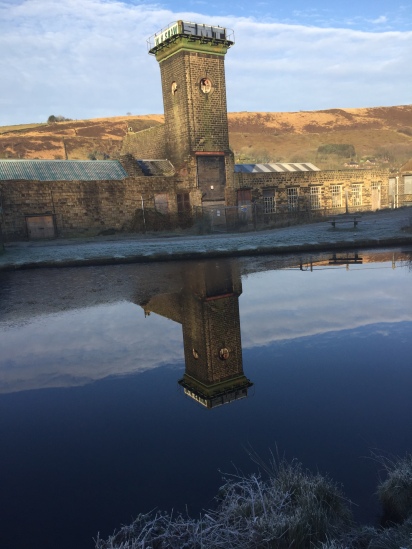 a walk alongside the canal, Uppermill to Diggle

As for poetry, the Poets & Players competition closed at midnight on Tuesday. I had a steady stream of entries to my inbox all day. By midnight I had about 250 new entries to process; and an unreliable internet. I did what I could in the short windows it gave me, so I’m now down to the last 50 or so. By the end of this week, they will all be winging their way through time and space to Sinead Morrisey, our judge. Then the wait for the results: watch this space. It seems to have been a record entry this year, so a big P&P thank you all who entered; and good luck.

I’ve been reading the book of essays Hilary Robinson gave me for Christmas: Rishi Dastidar’s The Craft (Nine Arches Press, 2019). It’s a good read. Favourite essays so far have been ‘I Will Put Chaos into Fourteen Lines and Keep Him There: On the Sonnet’ by Jacqueline Saphra and ‘Writing Poems Can Be Real Cool: On the Golden Shovel’ by Peter Kahn. There’s an interesting exercise at the back by Saphra to go with her chapter: she suggests fourteen rhyming words to use at the end of each line of a sonnet, to be written in iambic pentameter, with the traditional abba cddc efgefg rhyme scheme of the Petratchan sonnet. No prompt at the back from Kahn, but his chapter asks us to always be alert to lines of poetry—or prose—that will provide Golden Shovel, so my notebook is at the ready

Yesterday, Saturday was the best poetry day of all: it was the Poets&Players event at the Whitworth Art Gallery on Oxford Road, Manchester. The day began with a workshop run by Jo Shapcott. There were only two exercises in the workshop, but they were engaging. First, as a warm up, we were asked to write down a favourite word and a type of weather that says something about us. I wrote down ‘longing’: the first word that popped into my head; and ‘sunshine’ because it’s been a grey, grey week for weather and I’m a summer person. Then we had to write a ‘very short poem’, a haiku for instance, including those two words and a catastrophic event to finish it with. All this in fourteen syllables? I’ll write my attempt at the end of the blog. The second activity was more involved. We read ‘Kintsugi’ by Rebecca Perry (from Beauty/Beauty, Bloodaxe 2015). Kintsugi is a Japanese word, it describes that Japanese craft of mending broken pottery with gold, to make the mend—and the piece of pottery—more beautiful as a result of the break. The poem is about a broken relationship, and the mending of self by the narrator. It’s a beautiful poem. Next we lucky-dipped two ‘fortune cookies’ with foreign words and their meanings. I dipped ‘Eomchina’—which I read as ‘ee-om-chee-nah’, a Korean word meaning ‘Mum’s friend’s son’ in the negative sense of mothers being competitive and comparing their own sons to their friends’ sons, usually in a derogarory way to encourage them to do better. The second word was the Swedish word ‘Gökotta’ meaning to wake up early in order to go outdoors and listen to the first birdsong of the day. We had to put these words into a poem; or at least the sentiment behind them becasue we couldn’t use the word itself. I’ll maybe include a stanza of my effort at the end too.

The afternoon event was wonderful. Chris Davies, musician and fellow founder of Poets&Players, provided the ‘Player’ element yesterday. His first contribution was a flute piece evocative of the natural world, haunting and exotic, sounding of rainforests and birdsong. There were words too, spiritual spoken words. A second, supporting performer, Bisakha Sarker, interpreted the words and music in Indian dance. It was beautiful, graceful movement, as you’d expect from Indian dancing, Bisakha’s whole body to the tips of her fingers expressing the dance. What a wonderful start to the afternoon. 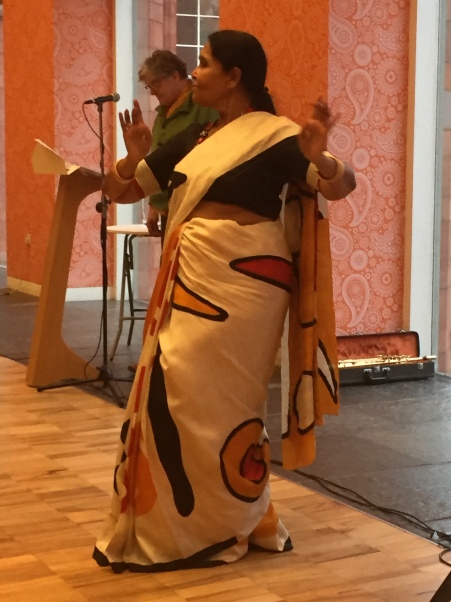 Bisakha Sarker dancing to the music of Chris Davies

Our poets were Jennifer Lee Tsai, Kim Moore and Jo Shapcott. Jennifer read from her pamphlet Kismet (Ignition Press), poems that address the conflict between her Chinese and English heritages. ‘River Mersey’ is ‘a geography of otherness’, a dedication to her grandfather who arrived as an immigrant into Liverpool. ‘Self Portrait at Four Years Old’ describes her sense of that same ‘otherness’ growing up as the only Chinese child in her primary school, where her uniform was ‘grey like an English sky’. It’s a sad poem of loneliness and difference: ‘I am learning how to be silent,’ she read. She explained how her father was concerned about her love of books because ‘the Cantonese word for book sounds like the word for to lose’. That seems wholly appropriate to me, as a book is a thing to get lost in.

Next reader was Kim Moore. Kim is a superwoman, juggling the disparate roles of poet, poetry teacher, PhD research student and new mother. There’s a photo that illustrates her super-human power on her website: https://kimmoorepoet.wordpress.com Baby Ally came to the reading and not a peep; perhaps she’s a poet in the growing? Kim read from her collection The Art of Falling (Seren 2015), and from her PhD portfolio, which will become her second collection All the Men I Never Married. Personal favourites are ‘The Trumpet Teacher’s Curse’: ‘a curse on the boy who threw up in his baritone/as if it was his own personal bucket.’ Every cursed thing in the poem actually happened in her years as a peripatetic music teacher in Cumbria. She read from a section of the book which addresses domestic violence, poems it’s difficult to hear: ‘And in that year I gave up on all the things/I was promised and left myself to sadness.’ The new work is different, still retaining Kim’s sense of humour, but addressing casual sexism and female desire. So far she has written about forty of the men she never married. Her PhD is coming to an end early this year, so will there be more? I look forward to buying the book.

After a short comfort break we had a second input of music from Chris Davies, this time incorporating a poem, ‘Frisco’, by the late Linda Chase, co-founder of Poets&Players. It was good to hear Linda’s lovely voice again; she’s still sadly missed by everyone who knew her. Poets&Players wouldn’t even be a thing without Linda’s creative genius. There’s a recording of ‘Frisco’ on our website: https://poetsandplayers.co/linda-chase/
Chris used an instrument called a hangpan, a kind of steel drum, but held on the knee and played with the hands. It’s sound was sometimes like a harp, sounding plucked, sometimes a harder sound more reminiscent of a steel drum. He told me hangpans are made in Switzerland and you have to go to the factory/workshop to buy one, to find the one that best suits you.

The afternoon ended with a wonderful reading by Jo Shapcott, our headline poet: https://www.joshapcott.com She read about Emily Wilding Davison. She’s most famous for being the suffragette who threw herself under the King’s horse; but Jo reminded us that Davison was a fearless campaigner for women’s suffrage, and her poem describes Davison hiding in a cupboard in the Houses of Parliament on the night of the 1911 census, so she could record her home address as the Houses of Parliament. No matter how frustrating the political situation gets, we should never waste our vote, because it was hard-won.  Jo also read a couple of poems about having to visit Guy’s hospital in London, the hospital where John Keats had been a surgeon. Her poems are imaginings of Keats being her surgeon there: ‘…let me feel your pulse for axioms’. Well, that line went into my notebook straightaway: what a good line for one of Kahn’s ‘golden shovels’! I’ll definitely be trying that on for size.

I love weeks like this, when my life fills to the brim with poems. Our next event at the Whitworth is on February 22nd: https://poetsandplayers.co/future-events/ with the poets J O Morgan and Maria Stepanova, with Sasha Dugdale as translator, music from Phil France. It promises to be another good event. Will I see you there?

SAD
This veiled sunshine is
longing for eggs frying on
pavements, melting wings.

And next is one stanza of the poem from the second activity: I think it was inspired by the news this week that a long-lost painting of Lowry’s has sold for in excess of £2,000,000. How noble is that for a ‘hobby’? I recently watched the film ‘Mrs Lowry and Son’, and she spent her life ruing the day her husband scuppered her middle-class aspirations through his mounting debt, forcing their move to a shabby mill district of Salford. She reminded me of Bill’s mum. Bill was an architect in his working life, an unlikely profession for a man from working class Manchester. His mum couldn’t appreciate what it took to achieve this and she used to say ‘He should have been a car mechanic, he was always good with his hands.’