The best news first: on Friday I heard from Dr Hurley that my revisions have been accepted and the thesis has been signed off. I am officially Dr Davies, fully and without the reservation of the revisions, and the award will be backdated to the date of the viva: 6th September. I have to resubmit the revised thesis as soon as the examiners have informed MMU of the decision, then my certificate will arrive. The graduation next July is an opportunity for the university to congratulate me. Woo hoo! PhD is behind me, a thing of the past, an ex-worry! Bill and I shared bubbles to celebrate. 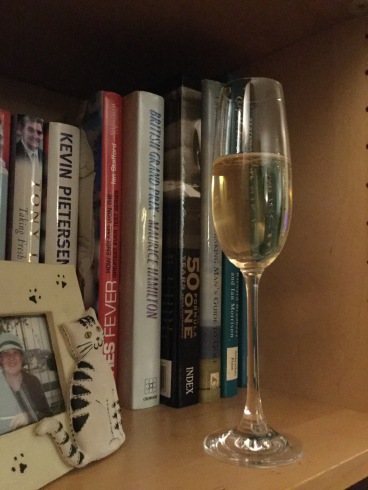 In other news, last Sunday I went with Hilary and friends to see Margaret Atwood at the Lowry theatre. She was ‘in conversation’ with the Turkish writer, Elif Shafak. It was a splendid event: Atwood is days away from her 80th birthday, with a mind as sharp as pins; she has lost none of her political fight. The first half of the event involved her talking about the relevance of The Handmaid’s Tale and Testaments to modern society. Shafak talked of how women writers are repressed in her native Turkey, and so the books resonated with her. You only have to keep up to date with right-wing news in the USA or the UK to see how close we live to Gilead. I read of an American woman charged with manslaughter because she was shot in the stomach and her unborn baby died. She should have taken steps to protect the child. Her attacker wasn’t charged: https://www.bbc.co.uk/news/world-us-canada-48789836

Or ‘pro-life’ politicians who make spurious claims about rape and abortion: https://www.motherjones.com/politics/2016/02/idaho-lawmaker-still-thinks-rape-cant-result-pregnancy-and-its-2016/

The right-wing in the UK is not better; Gilead, Atwood’s dystopia, is just around the next corner. After an interval there was a question and answer session with tweeted questions from the audience. The most memorable response in this session was Atwood’s claim that people get complacent as they get older, that the elderly sit back and leave protesting to the young. We mustn’t; if we disagree with something, we should speak out, she said: if we feel something’s wrong we shouldn’t just ignore it, put up with it. I’m sharing even more anti-Brexit stuff on social media now; and doing my best to challenge right-wing propaganda wherever I find it in the lead-up to the December election. We live in a frightening world: who knows where we’re heading?

A final word about the theatre event: why do audiences not know how to behave any more? People were coming and going during the two sessions, talking among themselves, rustling huge bags of sweets and popcorn. Phones were switched off, but vibrations for texts were answered so that screens lit up, detracting attention from the stage. Why can’t folk just sit down and shut up for the hour or so of a performance?

On Tuesday it was Stanza at the Buffet Bar, Stalybridge. We had an anonymous workshop this month: members send me poems they would appreciate feedback on; I put them all into one document, standard font and format, and send them out prior to the meeting for people to read and comment. We had six members in attendance, including one new member, and three apologies, so I think we’re off the endangered list. It was a very good meeting with some cracking poems. I took a poem I wrote at Peter Sansom’s workshop in Manchester Art Gallery a couple of Saturdays ago. I received good feedback, they liked the poem. I’ve since turned it into an alternative mother. One poem addressed the 39 Vietnamese migrants who died in the refrigerated container lorry. It was a very good treatment of the subject, from the angle of ‘hidden things’. We advised her to send it to the Morning Star for consideration. They publish political poetry. I wonder if she will?

On Wednesday I spent the morning putting a pamphlet together of some of my PhD poems. I heard at the end of the previous week that Hilary and I have both been shortlisted in the 4word pamphlet call-out. We had to send six poems initially; the email informing us of the shortlist requested 29-32 poems, so quite a substantial pamphlet. I decided which poems to include: 12 alternative mothers and twenty others. I printed them all out and spread them across the study floor to arrange and rearrange their order in the collection. I took out a couple and replaced them with other poems that seemed to fit better. It’s a long and precise process: if you want your pamphlet to be one of the ones that gets noticed you have to try your best to make it stand-out. I put them all together in a binder, and in a document on the MacBook, and left them for a day, then emailed the pamphlet file to Hilary. We’d agreed to meet on Friday in Caffé Abaco in Uppermill to feedback to each other on our pamphlets. Of course, we know each other’s poems fairly well from all the readings we do together; but it was interesting to see the poems as a collection, it raised issues that aren’t issues when they are individual poems: phrases repeated  across a couple of poems, for instance, are not an issue while they’re individual poems but are noticeable when the poems are relatively close to each other in a collection. It was a useful session. On Saturday, after watching the Rugby World Cup Final, I came up to my study and revisited the poems in line with Hilary’s feedback and then I pressed ‘send’ on the email. They’ve gone now for better or worse. I really hope they demand the editors’ attention. Good luck to us both.

On Wednesday evening Bill and I went to the Printworks in Manchester for the live screening of National Theatre’s A Midsummer Night’s Dream, directed by Nicholas Hytner. Oh. My. Word. How brilliant was that? I love the play anyway, but this production was the stand-out one for me. The play was broadcast from the Bridge Theatre in London. It was performed in the round, but more than that, it was immersive theatre, so the audience was an integral part of the show, drawn-in in all sorts of ways. Puck in particular had a good rapport with the audience. The actor who played Puck, David Moorst, was brilliant. The fairies in the play ‘flew’ on fabric trapezes. They were all acrobats as well as actors, and the effect was stunning. Puck was a contortionist I think, getting himself into all kinds of surprising shapes in his trapeze. I loved it. Hytner had transposed aspects of the roles of Titania (Gwendoline Christie) and Oberon (Oliver Chris) in his play, so that it was Oberon, king of the fairies who received the love potion from Titania the fairy queen; so that proud Oberon fell in love with Bottom the weaver, transformed into a donkey. The gender reversal in Macbeth a couple of weeks ago really didn’t work for me, but here it was brilliant; it brought a new dimension to the play, added to the comedy, and brought proud Oberon, and his human counterpart, Duke Theseus, down a peg or two. Oh my, it was a wonderful way to spend an evening. I just wish I could go to London to see the play in the theatre now; but a live screening is definitely the next best thing.

And there you have it: my week in words: a wonderful and rewarding week overall. I can stop stressing now about PhD, thesis, revisions and just put it all behind me. Of course, I intend to keep celebrating for as long as it takes, but that’s the good part. The stress and angst are things of the past. I’ll leave you with the poem I took to Stanza. I don’t see me sending it out to journals as an individual poem, and submission to pamphlets allows for previously published poems, so I can post it here. I think it’s self-evident who it’s about and it deals with the way women have been hidden by their history in a world belonging to men. Enjoy.

and we all forget your name