When I took early retirement, I had no idea that there was a whole world of poetry out there just waiting to be explored. I wanted to write, I knew that much, but I planned to write a book, a semi-fictional account of a failed work relationship. However, every time I put word processor to paper, it came out as a poem. I fell into poetry as I have fallen into all the very best parts of my life: parenthood, teaching; even retirement. I have lived a great poetry week again this week.

On Sunday I was at my desk by 9.00 a.m., ably supported by my personal assistant, Rosie Parker. She loves to sit on the desk when I’m working, so I have to keep moving the MacBook to the side to accommodate her until I find myself working with the MacBook on my knee while she takes over the desk. Cats, eh! Anyway, I put the finishing touches to the ‘minor revisions’, checked through Dr Hurley’s copy of the thesis with her comments and suggestions, to make sure I’d addressed all the most pressing—those marked with a green asterisk. I checked again, then went on the MMU website to fill out the relevant form on Skillsforge to accompany submission of the revisions for assessment. At midday I emailed the thesis off to Dr Hurley and Prof. Michael Symmons Roberts for approval. There: done! I have had an acknowledgement of receipt but nothing more yet. I’m expecting to hear this week. I love it dearly, but I want it out of my life!

On Sunday evening I took the tram to Manchester, walked along Oxford Road to the Royal Northern College of Music to meet up with Hilary. We were there for a Manchester Literature Festival event: Poet Laureate Simon Armitage in conversation with Guy Garvey, lead singer of Elbow. It was a lovely relaxed evening: Simon and Guy have been friends for about fifteen years, so it was a bit like looking in through the living room window while they did ‘friendship’. A host from Manchester Litfest asked the occasional question to bring them back to the theatre. There was chat, there were readings from Simon, there were songs from Guy. Simon even taught Guy, the singer, how to use a microphone! There was a book signing afterwards. I bought Simon’s latest collection, a bringing together of disparate commissioned pieces: Sandettie Light Vessel Automatic (London: Faber & Faber, 2019). Simon was one of my tutors on the MA Creative Writing at MMU back in 2007-10 and it was lovely that he remembered me as he signed my book. I went home a happy lady and added it to my ‘to read’ pile. 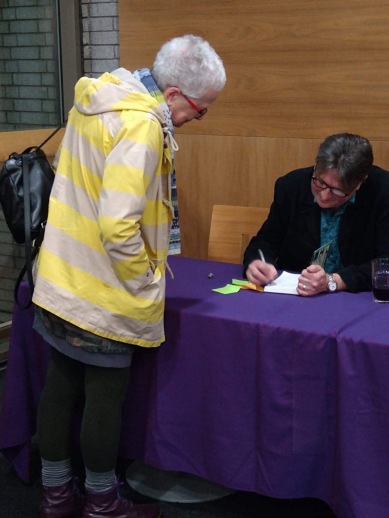 For the past five years, Tuesday has been one of the days I’ve dedicated to PhD work. This Tuesday I really missed it; it felt odd not having it to do. I haven’t felt that post-study bereavement so strongly all summer. Perhaps it’s a portent that the work is indeed finished. I gave myself a good talking to and decided to do what I’ve done all summer, and throw myself into some housework. I still have some of the post-PhD Big Spring Clean to complete. I hate housework, but it is filling the gap left by the thesis, this weird form of empty-nest.

On Wednesday I had to take Rosie Parker back to the vet for two more extractions. She has an autoimmune disease that attacks her teeth below the gum-line. About four weeks ago she had several teeth removed. The scarcity of teeth she had left meant that two sharp teeth in the upper gum were piercing her lower gum, leaving them very sore; so on Wednesday she had those removed as well. Poor thing, I hope that’ll be the end of it now. I have to take her back for a post-op check on Tuesday, but she seems fine, racing round the house with Jimbobs and generally doing what a young cat normally does. I’ve discovered that I can get medication into her if I can put it into a small saucer of cream, so I’m confident that she’s taking it. Spoilt? Rosie Parker? No way!

On Wednesday afternoon we had the log burner in the lounge taken out in prep for the chimney sweep coming on Thursday. A couple of bags of nesting material came out of the chimney, loads of twigs: big nest! When the sweep came on Thursday he put a periscope up the chimney and reported that a large nest was in place in the bend of the chimney. He took four hours to clear it out, a job that would have taken him an hour without the nest, which had to be broken up, hooked out and pulled down in pieces. It contained sheep’s wool that bound the twigs together, and whole cow pats that were used as cement. I think it was a complete apartment block actually, there was so much of it. But it’s gone. The trick now is to get bird-proof chimney pots before the next nest-building season. We had chicken wire on the chimney pots, but the birds, jackdaws probably, soon made light of that! We’ve asked a roofer to come and replace the pots with bird-proof ones. We light the fire on Christmas Eve, so he needs to come before then, because we keep it burning until the spring, by which time the jackdaw fraternity will be back, demanding squatters’ rights.

Yesterday, more poetry. Hilary and I went to the Manchester Art Gallery for a Poetry Business workshop with Peter Sansom. I met up with several poetry friends there: David Borrott who was on the MA with me and is a colleague on the Poets&Players committee; and Pam Thompson who had travelled up from Leicester, who was a prize winner in our P&P competition a couple of years ago, and read for us at the celebration event. It was lovely to be among poets and concentrating on some writing that doesn’t involve mothers. Creativity has been a barren landscape since I finished the PhD: I’ve found writing difficult, a dry spell, so it was good to have the stimulation of Peter’s writing prompts and get the ‘first draft pencil’ working again. I came away with three or four first drafts that might be worth working up. The poem I’m including in my blog this week is one I wrote yesterday. It’s too young to be let out on its own really, but I’m so pleased that I managed to write something I want to share. I think the poetry muscle might be healing, flexing itself again.

This is the poem I wrote from a piece of artwork in the gallery. The task was to find a painting, or a piece of artwork of some kind, and write from the stimulation of it. It was a wide-open task: describe what’s happening in the painting, write about it in a poetic form of some kind. I chose to write my poem in cinquaine stanzas. A cinquaine is a five-line syllabic form: two, four, six, eight, two syllables to the lines in that order. I wandered around the gallery waiting for something to inspire me when I came across a huge canvas, William Etty’s ‘The Sirens and Ulysses’. I sat in front of it for a while, just looking. When I started work I wrote three stanzas for my poem using cinquaines for each stanza. Here it is. Be kind to it, it’s still a baby.

Open
your eyes man, look—
their chorus is poison.
Too many have succumbed, lie
broken.

Their lyre
lies, there are no
home hearths in this aria.
It’ll suck flesh from bones, then spit
you out.

Hold tight
to the main brace,
splice yourself to the hull,
stop up your ears with bladderwrack.
Sail on!