I’ve had to give myself another good talking to this week in order to find the motivation to start work on the revisions. I’ve been doing some reading and note-taking, but the thought of starting to first draft the revisions was daunting. I was beginning to obsess about it, knowing I had to do it, knowing the celebrations would be short lived if I didn’t get the job done; but unable to actually introduce Word to paper. I had an email from Antony, my Director of Studies that put it all in perspective, pointing out that it is only four paragraphs to add to the thesis. He included details of a book about the controversies surrounding Freud’s ‘legacy’, which was available electronically from MMU library, so I accessed that midweek and read the relevant chapters. The job must have been going through my head while I slept, because I woke up a couple of times this week thinking about it, chewing over useful phrases, which I jotted down when I was near a notebook. Yesterday I made a start, and I’ve written two of the four paragraphs—which could actually cover three of the tasks, I think. So that’s at least half way through; I can do this. The motivation’s back, I’ll be at my desk again later today crafting the next two (one?). Hopefully I’ll have it to send to my DoS by midweek for feedback. Then, of course, I’ll need to edit the list of contents, because all the pages will have shunted along with the redrafts! I’ll be happy to see the final-final back of it, and submit it to the University. I don’t need hard copy of this redraft, apparently, just electronic submission; but I’ll get a bound copy for my own use, to adorn my bookshelves and to act as a strong deterrent if I’m ever tempted to do anything as rash as this again!

Poetry has had its place in the week. On Monday I heard back from Rebecca Bilkau, editor of Well, Dam!: the latest Beautiful Dragons project. She likes my ‘Pollarded Willows on Whittlesey Wash Road’ but confirmed that it’s two lines too long to fit the publishing spec of 38 lines max, including line breaks. I suspected that might be the case, so I ‘pollarded’ it by a couple of lines, made sure I liked it as it was, saved it as Mk4, and sent it back to her on Wednesday as promised. We’re planning a launch in Buxton in November, which takes longer to organise than you might think, involving so many poets. I’m easy for several of the dates mentioned, so I’ll look forward to that. There will be other launches around the country, some of which I might also get to; I’ll post details on here when I have them.

On Tuesday it was our Poetry Society Stanza in Stalybridge Buffet Bar. We met to read and discuss the Forward Prize nominees this month, prior to the awards in October. I bought a copy of The Forward Book of Poetry 2020, which has a selection of ‘best collections’ poems along with the shortlisted ‘best poems’ and the commended poems, so we had a lot to keep us going. Unfortunately we were on the red list again this month, there only being three members there; but I received three apologies as well, so we don’t need resuscitation just yet. The poetry was wonderful and discussion of the poems was interesting. We’d already read and discussed two of the collections in previous meetings, before they were shortlisted for Forward recognition: Fiona Benson’s wonderful Vertigo and Ghost and Raymond Antrobus’s The Perseverance. Other poems I enjoyed were Isabel Galleymore’s ‘The Starfish’—‘fizzy skinned, pentamerously legged’: fantastic language. It describes a starfish devouring a mussel; but it’s also, I feel, a metaphor for human relationships. It’s from her shortlisted ‘Best First Collection’, Significant Other.I also read a Rebecca Goss poem ‘Rachel’ for obvious reasons: ‘I spent the day being Rachel…’ it starts, and goes on to outline a day in which she adopts a persona: ‘I decided that as Rachel, I wasn’t interested in birds after all’. I thought, what a wonderful way to spend a day, being someone else; and what a good workshop activity, to write as someone else, adopting their mannerisms and ways of using language. I might give it a go. When the revisions are done.

The set of Macbeth, showing the couldron, at the start of the play.

On Wednesday evening Bill and I went to the Royal Exchange Theatre in Manchester for a performance of Macbeth. The eponymous antihero was played by a woman in a same-sex marriage. This is one of my favourite Shakespeare plays and I thoroughly enjoyed it. The witches doubled as servants in the Macbeth household, bringing an element of threat and menace in the way they often stared down Lady Macbeth. As the weird sisters, they were slightly manic and extremely sado-sexual. The feast scene, with the ghost of Banquo, was the highlight of the performance for me. It was a masked ball with guests fancy-dressed as animals etc, except for Queen Macbeth, who wore an ill-fitting, strappy gown that made her look rather anorexic, I felt. But it was red, signifying blood, a constant trope throughout the play: red was everywhere. Banquo came dressed as a lion, removed his lion’s head to reveal himself to Macbeth, who totally flipped; no-one else could see Banquo, bloodied from his assassination earlier in the day. Somehow, and I really don’t know how they managed to stage it except it might have been magic, Banquo’s costume contained someone else, and the party continued. Then Banquo raised his ghostly, ghastly blood-spattered self from the centre of the table, sending cakes, jellies, macaroons scattering in all directions. It was wonderfully well done, theatre at its best. There was a school group in the audience and they were rapt: this was a modern, contemporary interpretation of a great play. But if I’m brutally honest, I really don’t see how having a lesbian Macbeth added anything to the play. It didn’t make any great feminist statement, it didn’t celebrate LBGTQ issues in any way; it was an added layer without exploring its layers. It was a good night out, though. Macbeth’s always an interesting date! 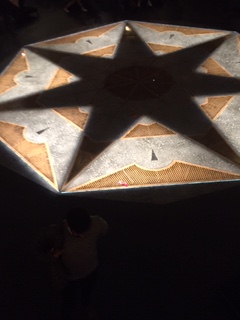 The same performance space at the end of the play.

On Friday I met up with Hilary and Polly to discuss next year’s Line Break week. We met for lunch in Bundobust in Manchester Piccadilly. We had a lovely lunch, but didn’t get far with planning, because Polly isn’t sure she’ll be able to join us again this year. Family commitments around Manchester and in the North East are keeping her particularly busy currently and she doesn’t know if the situation will be any less pressing before we go. We agreed to hold off planning until the end of January, when she might have a better idea. I hope she can make it: we had a good week last year, but it wasn’t the same without her. Hilary and I went back to the Exchange Square tram-stop via T K Maxx, and spent money we didn’t plan to spend. I bought Pierre Cardin leggings for £3.99! Whichever way you look at it, that’s got to be a bargain!

I’ll be writing next week from Swindon. Hilary and I are off to the Big Poetry Weekend, the Swindon festival, on Thursday. So I’ll have lots to tell you next week; and with any luck I’ll have sent my revisions to Antony for feedback by then, and not have them to worry about while I’m away. I’ve had a poem accepted for Domestic Cherry 7, a journal edited by the festival organisers, and I’ve been asked to read it at the launch in Swindon on Sunday evening. ‘Spooning’ is the poem, and it describes mother’s method of crowd control when dad wasn’t there to maintain order at mealtimes. Here’s the poem, with thanks to Mabel Watson and the crazy team at Domestic Cherry and the Big Poetry Weekend. I can’t wait, bring it on!

What I remember of the spoon is
how it was her crowd control at mealtimes
how she held it upright in her hand,
its handle to the table-top, how it tapped
a rhythm like a slow drum

how when we laughed we knew the spoon
would greet us with a firm handshake,
a spoon shaped bruise would raise itself
on the back of our hands, how we tried
not to laugh but it was a contagion

how you tried to drown your laughter
in a cup of tea but one snort spread tealeaves
across your face like freckles and we laughed,
laughed so much we knew. Here it comes now…