When I first retired, about fifteen years ago, the ‘escalating cost’ of caring for an aging population was often a news item, as it continues to be today. That ‘aging population’ was—is—often depicted in the main-stream media sitting in the kind of upright armchairs deployed in care homes, its arthritic fingers tapping out some unheard rhythm on a wooden chair arm, a cup of weak, milky tea and rich tea biscuits on a plate close by. If we saw its feet, they were almost certainly encased in plaid slippers with Velcro fasteners or with pompoms on the instep. I was horrified to hear one professional carer of this ‘elderly population’ declaim that ‘the old dears like a rich tea biscuit with their cuppa.’ I wanted to shake her, wake her up to the reality of these ‘old dears’, men and women who had done extraordinary things in their lives. Her ‘old dears’ were the generation who had survived the second world war; some of them had actively contributed to the war effort, as front-line soldiers, RAF and Navy personnel, ARP wardens, nurses, firefighters home guard, land army, munitions workers etc. etc.; but also as special agents, parachuted into enemy territory to aid and support troops and resistance groups, to work with occupied populations. They had, in short, done extraordinary things; and their depiction as decrepit hardly-people disturbed and angered me; perhaps more so because I was hurtling towards the age of the pompom slipper myself. ‘Do not go gentle into that good night,/ ‘old age should burn and rave at close of day’,  wrote Dylan Thomas in his famous and most beautiful villanelle. Where in the main-stream media is ‘old age’ burning and raving? Where, the recognition that the ‘elderly population’ is capable of extraordinary things? I will not go gentle, and I have been reminded several times in the last couple of weeks of the extraordinary thing I have done in achieving PhD at 72 years of age, for no other reason than it was my personal mountain, out there to be climbed. Well, I reached the summit, I planted my flag. Congratulations from friends and family have continued to arrive this week: this tee shirt from my son Michael, for instance: 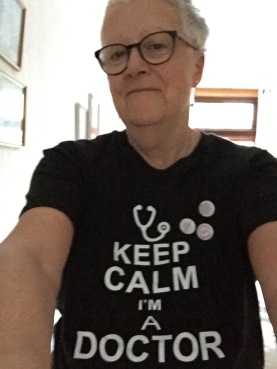 An accompanying note that said he tells everyone he meets about what I’ve achieved. The badges are from my lovely friend Hilary: ‘wear them with pride,’ her note said. Another friend, Joan, gave me three individual bottles of wine with instructions to share with no-one: they are all mine, to celebrate my achievement; on the other hand, her son joked that I’m a ‘posey showoff’ for having so many letters after my name.

My point is that, although I am proud of my achievement, of course I am, I’m not the only one of an ‘elderly population’ that has done an extraordinary thing. There are others out there who do extraordinary things every day, and I would love to hear from/about them. I’m thinking that this is where my blog will go next: in the celebration of we extraordinary oldies who refuse to ‘go gentle into that good night,’ who continue to ‘rave at close of day’. If you are one of these, or you know someone who is, I’d love to hear from you/them. Let’s celebrate raving age, not silence it with milky tea and rich tea biscuits.

I went to London yesterday to see another extraordinary oldie: Sir Ian McKellen turned 80 in May this year. ‘On Stage’ is his birthday celebration tour.

Sir Ian McKellen, on a poster outside the theatre and on the cover of the
performance brochure

He has taken it to all countries of the UK, performed in umpteen towns, cities, theatres and venues from the Orkney Islands to Jersey. McKellen shows us how to ‘rave at close of day’. Last year I saw him give the most powerful portrayal of King Lear I have seen in my life. His ‘Lear’ will be my yardstick for measuring performances of the role in the future. Yesterday he was ‘On Stage’, talking about his stellar acting career. It was a one-man show: just McKellen reminiscing, reliving some of his landmark roles, telling us about his personal journey through life and career. It was wonderful. There were parts I was unsure of: he read a Gerard Manley Hopkins poem, declaimed it as an actor performing his lines. I didn’t like it, too ‘actorly’, too dramatic, the performance detracted from the words in my opinion. Also, my favourite speech from Macbeth, the ‘tomorrow and tomorrow and tomorrow’ speech, he performed as boredom, ennui, which I agree is a valid performance decision, but I didn’t like it: the slow delivery detracted from the wonderful poetry: again, just my opinion. But the show as a whole was wonderful; and McKellen was extraordinary in his octogenarian energy and humour, in his ability to hold an audience and entertain the crowd for almost three hours. At the end of the performance he came into the theatre foyer with a collection bucket to raise more funds for the theatre-and-arts-related charities the show supports. What a man, what a human being.

This wasn’t my only theatre visit this week, either. On Tuesday evening, Bill and I went to Home in Manchester for a performance of Jackie Kay’s Red Dust Road, her memoir of the time she was searching for her birth parents, searching for her own sense of her true identity. Jackie was adopted at birth, raised by her adoptive parents, communist party members in Glasgow. Of course, their political affiliation is irrelevant in this context; but my favourite part of the book, which I read about four years ago, is the part where she eventually meets her birth father, Jonathan, in his native Nigeria, and he is a born-again Christian. His first action on meeting her is to ask her, this communist-raised woman, to pray with him to atone for the sin of being born out of wedlock: he views her as a sin to be forgiven. Trust me, it is written with humour; and the play opened with this scene. Stefan Adegbola, playing Jonathan, really emphasised the humour of the scene, playing Jonathan as an evangelical faith-healer character while Sasha Frost—Jackie Kay—stood by wide-eyed and disbelieving. I loved the book, which showcases the humour of Jackie Kay’s writing wonderfully well; the play is very loyal to the book and it includes some poems from The Adoption Papers (Bloodaxe Books, 1991), her multi-voiced poetry collection addressing her experience of adoption. Unfortunately the play’s run at Home finished yesterday, but if you find it being performed somewhere else, I urge you to see it: you won’t be disappointed.

Other events this week: I spent a morning in the MMU library on Wednesday checking out some of my earlier reading to support the ‘minor revisions’ to the thesis. I forgot to take my reading glasses so I had to work with the varifocals, which are not ideal for reading books: too much head movement needed to focus the print. And I don’t like working in the library anyway, too many distractions: I’m a reader who needs to empty the space around me when I’m working, lose myself in the job in hand. But it was necessary and I persevered. I got the reading done that I needed to do, and feel a step closer to completing the revisions and putting the thesis behind me once and for all.

I also ordered the Forward prize anthology this week: The Forward Book of Poetry 2020 (London: Bookmark, 2019). We’re discussing the poetry shortlisted for this year’s prize at our next Stanza meeting, on Tuesday coming. I picked up my copy of the anthology from Waterstones on Friday and read it on the train to London yesterday. There are some stonking good poems in there, the best of contemporary poetry. We have already read a couple of the collections at Stanza: Fiona Benson’s Vertigo and Ghost (Cape Poetry) and Raymond Antrobus’s The Perseverence (Penned in the Margins). So I know we are in for a treat on Tuesday at the Buffet Bar, Stalybridge Station. Can’t wait.

So that’s it really, my week, full as ever. Rosie went back to the vet for a post-op check on Tuesday: she’s doing well, they want to see her again next week when her meds are all complete. Oh deep joy, I have to take her and Jimbo on the same day, he for his annual health check and vaccinations. How much am I looking forward to getting two cats into pet carriers on the same morning. Wish me luck: I might need hawking gloves to lift Jimbo, he’s not as light or malleable as Rosie. I promised the vet I’d do my best, and none of us can do more, nor should do less, than that.

A poem to finish, as usual: this is the first sonnet in my sonnet crown, a sequence of seven sonnets. It’s focused on an old woman, a member of the ‘aging population’ of milky tea drinkers. It was inspired by a photograph by Bruce Gilden in the Manchester Art Gallery’s ‘Strange and Familiar’ exhibition, 2016-7. The grotesque photo of this old woman was juxtaposed with photographs of mini-skirted girls from the sixties, enjoying the sexual and social freedoms of the era: a time when this old woman would herself have been young, mini-skirted and sexually attractive. Everyone has a history, after all. We ignore this to our detriment as a society. My sonnet crown recognises and celebrates this.

I’m looking in the mirror
at a lardy old woman; but here
in the photo, Hyde Park ’68, I was thin
as an elf, confident, full of myself:
Quant make-up, leather jacket,
geometric hair, first generation mini-skirt,
burned bra.
See the photo of me then
and my mirror self now: blood-flushed
face a street map of veins,
wattle chin, whiskers like thorns, tits
slapping my knees.
I get that life’s a burlesque but
you landed the role of grotesque.