I’ve been spring-cleaning. I realise you probably don’t want to keep hearing all about it, but I saw this week how it is a progressive stage of the PhD. I’m suffering from ‘deadline guilt’! It’s a form of PTSD: Post-PhD Stress Disorder, although I have no proof it’s actually a thing. If it isn’t it should be. I have this residual feeling of guilt if I’m not at my desk by 9.00 a.m. working toward the PhD; then I remember the PhD is submitted and there are no deadlines to meet. So I’m spring-cleaning with a vengeance; spring-cleaning with my usual obsessive, fully committed vigour. I’m not just spring-cleaning the house: I’m spring-cleaning my brain, getting back to some form of normality post-PhD. I’m dusting the PhD cobwebs out of the corners, polishing the mental windows, throwing out the build-up of collected academic paraphernalia, clearing my mind. It’s working.

I visited the charity shop again this week, with bags of clothes and other clutter from the bedroom. Now I’m starting on my study, and that really is a clearing out of a past life. I came across stuff relating to a race relations/community cohesion project I led when I retired from headship in 2003. That’s almost sixteen years ago! It all went through the shredder; with the admin stuff from my very last OU course before I graduated in 2007. More black bags of contributions to the charity shops—and I haven’t even started on my bookshelves, or the cupboard where I keep all my sketching stuff. I’ve got plenty to keep me going while I wait to hear about the Viva.

I have done other stuff this week. My son Richard was fifty on Monday, so Amie and I went to Peterborough to help him celebrate. On Sunday I made him a yummy plum pie: it’s a bit of a joke in the family; but it was a real pie, made with love. We took him a handmade guitar, a book of newspaper headlines about his beloved Peterborough United; Amie took him a Bose speaker system and a vegan birthday cake. We went out for a meal, I drank too much wine. It was a lovely evening. A friend called when we went back to his house for birthday cake: she gave him a garden hammock. He said he loves being fifty because people keep giving him things.

On Tuesday, Hilary and I went to Sheffield to read at the Bath Hotel in the ‘Writers in the Bath’ series. Our poetry friend Linda Goulden was also reading from her new pamphlet, Speaking Parts (Half Moon Books, 2019). Hilary and I read from our joint pamphlet Some Mothers Do…as well as other, newer poems. I read from my thesis, which felt good, no paper flapping around to unsettle me! At the end of the evening the audience were invited to request we each repeat one of the poems we read. The audience requested I re-read ‘On Falling In Love With McNaught’, about which, more later. We sold some books, we bought some books. Cora Greenhill, who organises the ‘Writers in the Bath’ readings took us all out for a Turkish meal in Efes before the reading, so that was a pleasant and relaxing start to the evening. It was a lovely night altogether; although the weather was horrible, really lashing rain which made driving the dark Yorkshire country roads on the way home a bit hazardous.

Early in the week my body started to brew the headiest cold in the universe. Those bloody microbes that saw off H.G. Wells’ Martians have inhabited my body. So I’ve been dragging that around with me for most of the week. When I was a teacher/headteacher I always managed to get through the term-times without being ill and then got poleaxed by germs in the holidays; same format: finished the PhD, knocked over by microbes! But you can’t keep a good woman down so I’ve told it to do one, and carried on regardless. But oh my, those sneezing fits…I think I’m the first woman to catch manful: perhaps it’s mutating?

Enough: here’s a bit more about McNaught. In 2007 I was in Australia with Bill, following the one-day international cricket. As part of the holiday, we drove the great ocean road from Melbourne to Adelaide, stopping off at a couple of hotels en route. On the last night before Adelaide, we stopped at a small town called Robe, at a lovely guest house called ‘Ann’s Place’. Ann was a bit like a parody of Dame Edna, but a wonderful hostess. After the evening meal, her husband suggested we should go out into the garden to see McNaught’s comet, which was visible in the southern skies at the time. I didn’t know too much about McNaught’s comet, and expected to spot a large star or something. Anyway, we went out into the garden, sat on the garden wall looking out over the sea and we saw…nothing. We waited about fifteen minutes and gave up, decided to go back indoors. When we turned to go in, there it was, behind us all the time. Oh, my word, it was beautiful! 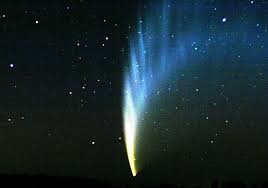 The photo doesn’t do it justice. It had a glowing ball at the front and a long, long tail. It looked close enough to reach up and touch. It was like that wonderful depiction of a comet in the Bayeux Tapestry, or a like child’s drawing of a comet. It was perfect, and thoroughly gob-smacking. And when you factor in that it only appears every 40,000 years, how lucky were we to be there to see it? Think about it, the last time it appeared, the very first humans were beginning to inhabit Australia! I felt so privileged to see it. I started my creative writing MA at MMU in September of that year, and I wrote a long rambling poem about McNaught, about the chances of us bumping into each other in that remote place. Simon Arimitage, the new Poet Laureate, was one of my tutors at the time, and I took the poem to one of his workshops. He suggested I was trying to write a love poem, and advised me to think of it as such in the redraft. Well, I had a bit of a down on men after two failed marriages, and love poetry wasn’t a personal speciality, so I wrote a ‘not-a-love-poem’; a tongue in cheek poem about falling in love with McNaught without having to endure the break-up of the relationship. This is that poem. It appeared in Some Mothers Do… Our editor, Rebecca Bilkau, wanted a bit of light relief from all the mother stuff, and it doesn’t get much lighter than this tongue in cheek love affair!

On Falling In Love With McNaught

You didn’t take me out or wine and dine me
at Don Gio’s, expect me to laugh at your jokes,
or touch my fingers across the table, or buy me
flowers like ordinary blokes.

We didn’t enjoy a first blistering kiss,
or share a universe-shifting fuck
that makes you wish it could be like this
for ever, knowing you never have that kind of luck.

We didn’t run barefoot on winter beaches
or play hide and seek among autumn trees
or picnic on chicken and soft summer peaches
or laugh at ourselves doing any of these.

We didn’t get married or live as a couple,
and share a life or a name or kids;
so your twice worn socks couldn’t burst my bubble,
or your morning farts or your pants with skids.

You never once, in post-coital passion
whispered a strange woman’s name in my ear
or came home drenched in your girlfriend’s Poison
or shielded your phone so I couldn’t hear.

You didn’t promise roses and bring me thistles
or when I soared try to tie me to land.
McNaught, you were never a man to commit to

but a brilliantly cosmic one night stand.

1 thought on “Microbes, comets and a good clear-out”