It’s  been one of those weeks when everything I’ve done has led to several other things to do. So I’m glad to have got to Sunday having achieved anything at all. And yet, looking back through my journal, I’ve achieved a lot.

I’ve had a week of poetry and PhD. Some life in there somewhere, but it’s difficult to find when you’re working towards a tight deadline and every job throws up another three jobs. First, let me tell you about PhD. A friend who has completed a PhD sent me this photo a year ago: 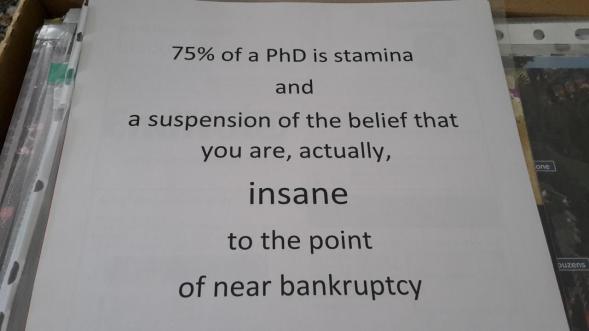 And I kind-of got it when she sent it; but this week it has been on my mind a lot. Stamina. PhD is definitely a marathon; but with your feet tied at the ankle and stuck in thick black treacle; at midnight without a moon; and a thick elastic band around you waist and tied to an oak tree. That’s how it has felt this week.

I’ve been reading through the thesis now that I’ve altered the order of it, to make sure the footnotes all comply; checked the footnotes and bibliography for complicity with the style guide. On Wednesday I concentrated on the creative side of the work, making sure I addressed all the issues in Jean Sprackland’s latest feedback. I re-wrote a poem I’d written as a coupling: that’s a poem that takes a text that you haven’t written and intersperses it with related response lines of your own poetry. It’s a form Karen McCarthy Woolf invented and perfected in her collection Seasonal Disturbances (Carcanet Press, 2017). This form works perfectly in Woolf’s collection; less well in the attempt I’d made around a letter my parents received from my school on the death of my brother: about which more later. So I revisited it, ditched the coupling and rewrote it as a direct response to the letter. Much better pleased with it now, less forced, less trying to be something it’s not. So that was a good job done.

I also decided to completely reorder the collection. Jean had suggested I retitle the collection Alternative Mothersas this sequence of poems is the backbone of the collection. So it made sense to intersperse them throughout the collection rather than keep them all together as a mini-series. But of course, that was one of those jobs that brings in its wake several other related jobs: because I’d reordered the poems, the contents page had to be reordered as well. And then the footnotes in the thesis relating to the collection had to be edited, both with the title of the collection and the revised page number in the list of contents.

Yesterday I re-read the whole thing with a view to sending it back to my support team for feedback. Hilary had taken it away with her to Prague, where it had become the bedtime reading on her city break. How lucky am I to have a good friend prepared to do that for me? Every morning she sent me feedback following her reading, so yesterday I addressed that really useful feedback as well; some of her issues I’d already addressed in my own re-reading of the thing, but not all. For instance, silly things like where I’d written ‘an imbalance’, then later inserted ‘wide’ without changing the ‘an’ to ‘a’; and I’d written 190 instead of 1990 in one of the footnotes. I’d missed these silly errors in all my re-readings. Having done all that I thought it must be ready now to go back to the team. But I checked the advice I’d had from them at our last meeting and realised I still had one job to do, which required a minimal amount of writing. But of course, that minimal amount of writing added up to a nudge of the page numbers, so the knock-on is that page numbers in the contents for the collection don’t apply  any more, they’ve all moved up one. I corrected that and thought it must be ready to go off to the team now before the recognition dawned that all references to the collection in the footnotes would also all have the wrong page numbers again. Aaagh! That’s what it’s like at this end of the marathon. You have to keep returning to the last Km marker and running that bit again. I’ve saved that job for later today. My agreed deadline was early April, which for my own convenience I’ve brought forward to the end of March as the coming week is going to be a hard one to fit work into. I’ll meet my deadline later today, and then a week or two when I don’t have to worry about it for a while.

So, if you’re thinking of doing a PhD, or you’ve just started out, prepare yourself for this end marathon, tied to a tree on a road with a treacle spillage. On a moonless night. You’ll come to it; so enjoy the relative freedom of the early reading and research, the wonderful acts of creativity that it will entail, whatever your area of interest. It’s all good preparation for the stamina you’ll need at the end. And no, you won’t be insane, you’ll just suspect you might be.

How have I managed to fit anything else in this week? Dunno, but I have. On Tuesday it was our monthly Stanza meeting at Stalybridge Station Buffet Bar. We were reading Fiona Benson’s extraordinary new collection, Vertigo and Ghost (Cape, 2019). I had several unavoidable last-minute apologies from members so I wasn’t sure how many would be at the buffet bar when I arrived. In the event it was just me and fellow poet, Linda Goulden. Yup, only two of us. We read poems from the collection, discussed some of them; but mostly we just read them out loud and were gobsmacked. It really is a brilliant collection, just crying out for prestigious awards this year. Watch this space.

I also finished printing and parcelling up all the entries to the Poets&Players 2019 competition. Two reams of paper, parcelled up in a Doc Martens boot box, taken to the PO on Tuesday afternoon. Parcel tracking told me they arrived with Kei Miller on Wednesday morning. Our PO service is wonderful: that huge parcel, imagine it, two reams of paper, quite some weight, cost less than £20 to send special delivery, to arrive, signed for, the next day. If you entered our competition, good luck with your entry. I can’t wait to hear of our prize winners now. Details of our prize winning celebration event can be found on the P&P website, along with other upcoming events: https://poetsandplayers.co/competition/competition-2019/

So that’s it really. I’ve had a productive week. I’m looking forward to a less productive but thoroughly enjoyable and relaxing week with family and friends this week, the thesis a receding memory. For a while at least.

Returning to the poem formally known as a coupling: when my mother died and we were clearing her effects, I came across a letter from my school, offering condolences on the death of her son, my brother. I’ve told you before about the demon headmaster, who cared nothing for those of his pupils whose parents weren’t wealthy enough to cough up into the school fund. Hardworking people like my parents and the parents of my friends in the ‘B’ stream. Well, this said ‘letter’ was typed on a school compliments slip, complete with corrected typos — in the days before word processors when your typos were just over-typed. Shoddy. And if that wasn’t enough, the school had addressed the letter to my brother ‘Mr. H. E. Rudkin’, not my father, ‘Mr. A. E. Rudkin’. How insensitive was that? But it was also written in the week of my brother’s death, the same week I was given a Saturday morning detention for not handing in my homework. My poem addresses this token act of ‘condolence’, and gives me a vent for my own anger. He really was a Roald-Dahlesque headmaster.

Here’s the redraft; I hope WordPress copes with the unusual formatting: I have it in two columns on the page: the letter and my response. Fingers crossed. No, no kindness to my formatting, but you’ll get the drift:

I am very sorry indeed at your terrible (olss) loss.

Nothing one can say can be of much comfort to you. Only those who have had to bear such things can fully understand. Those of us who have children can try to — no more, I suppose, than that. Try as we do, we simply cannot fully understand, I am sure.

However, we feel for you and yours very deeply indeed, and are sorry you should have to undergo such harrowing experience. May you be given (strngth) strength to see over this affliction.

…is hardly grief at all

Your note, written on a school compliments slip, complete with typing errors and crossings out, was in my mother’s effects when she died. She kept it for thirty years, because you addressed the envelope to the son she’d lost  (you couldn’t even get that right) and it brought him back to her for a while.

She didn’t know how you delegated this writing chore to your deputy on the same week you shut me in the library on Saturday morning to do the homework I hadn’t handed  in. I didn’t tell her about the detention, her head was too full of death.

Did you have a thesaurus of platitudes about loss? Well, chew this over: I was one of ‘you and yours’. I didn’t feel you feeling very deeply for me. Because a young girl’s grief is hardly grief at all, is it?

Do you remember Deidre Harrington, who died about the same time as him? She’s buried in the same Churchyard, just at his feet. Deidre’s parents were on the PTA.

I’ll lay a bet they got the full headed notepaper, no typos.