This week has been what I mean to make of all my weeks post-PhD. It has been full of poetry and friends. It’s the kind of week that makes even February bearable.

On Tuesday it was Bill’s birthday. I bought tickets for Mowtown the Musical for his birthday, but the tickets are for later in the month, so he said he’d like to visit the Leonardo da Vinci drawings in the Manchester Art Gallery and have lunch in town. And that’s what we did. We had to queue, even on a Tuesday morning, for about half an hour; but we’ve waited 500 years to see them, so a few more minutes was neither here nor there. Eventually we made it to the gallery where the small exhibition was held. The drawings are from the Royal Collection and are shared around several cities in the UK to mark the 500thanniversary  of Leonardo’s death. Oh my word, they were wonderful. As an ex-nurse, I was particularly moved by his anatomical drawings, and his drawings of the foetus in utero. 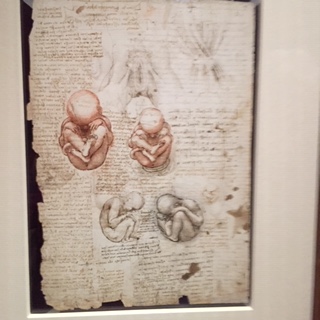 I learned that Leonardo was left-handed and that he wrote the notes on his sketches from right to left in a backwards mirror-writing. He found it easier to pull, rather than push, the pen over the nap of the paper. How fascinating is that? A few years back I fractured the neck of my humerus the day before my Stanza group was due to be recorded for Ruth Padel’s ‘Poetry Workshop’ on Radio 4. Ruth started with some warm-up writing activities, but my right hand—my write hand—was out of action; so I did what Leonardo did, and wrote with my left hand in a backwards mirror-writing. It’s a skill I taught myself when I broke my right arm as a child; and it’s easier than you think. You should try it. Looking at the notes on the foetus, it’s clearly a skill he perfected. I find it interesting that he was making detailed drawings of the human anatomy, and yet human medicine in the Renaissance was still based on Galan’s anatomy of the chimpanzee. How often in history has genius been ignored or sidelined in the interest of the status quo, or flawed public opinion? Let’s face it, it still is: climate change, the economy post-Brexit, the adverse effects of austerity on poverty and social fabric.  In the Gallery shop afterwards, I found a book of Leonardo’s drawings, which I think will help with some poems. £9.99 for ten drawings, yes that’s a deal; except when I got to the till it had been reduced to £2.00. It’s a book they’ve recycled: it marks the sixtieth birthday of the Prince of Wales, so it’s about ten years old. But that’s OK: the drawings in it are more than 500 years old. It felt like my birthday as well as Bill’s. 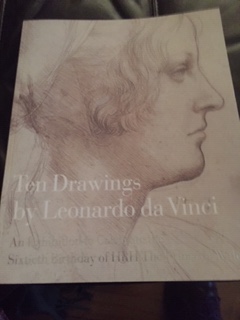 Wednesday was full of poetry. In the morning I was discharged from physiotherapy, where I’ve been having treatment on the damaged left shoulder. To be honest, the Prednisolone is probably as much to credit for the improvement as the physio, a fact the physiotherapist herself concedes, but she advised I keep up the exercises to lessen the chances of a repeat of the problem when I eventually reduce the Prednisolone again in future. That sounds like good advice. So, it was about 2.00 when I collected Hilary and we went to a meeting in Lydgate, an area of Saddleworth, to meet with the Lydgate Stitchers. They’d seen, in the Saddleworth Independent in the autumn, an article about the launch of Some Mothers Do…and were interested in doing a joint sew-in cum reading. They are doing some wonderful collaborative work, depicting the work of a local artist, Jill Harrison. This is her wonderful art work, depicting the development in history of Lydgate:

and this is a detail of how the Stitchers are depicting it in fabric:

We went from Lydgate to Manchester for the second of Carol Ann Duffy’s series of ‘People’s Poetry Lectures’. The first was in the autumn and featured Gillian Clarke’s lecture on Dylan Thomas. On Tuesday it was Michael Symmons Roberts on W.H. Auden. It was a lovely evening: lots of poetry friends were there, including some I haven’t seen for a while. The lecture was really good too, delivered in Michael’s lovely soothing voice. It was interesting, intelligent and accessible. I was surprised to hear Michael say that Auden and Thomas were ‘near-contemporaries’, that there was only seven years difference in their age. I suppose I think of Auden as mostly a pre-war poet, and Thomas as a poet of the post-war era. Of course that’s rubbish, they both wrote in the forties and fifties. I love it when life forces me to reboot my assumptions. The next lecture in the series is on March 7th: Andrew McMillan  on Thom Gunn. I’m really looking forward to this one: http://www.manchesterwritingschool.co.uk/events/the-peoples-poetry-lectures-andrew-mcmillan-on-thom-gunn

Get your tickets now, you won’t be disappointed.

And then yesterday. What a lovely, poetryful day I had yesterday! Hilary and I went to the Manchester Art Gallery for the Poetry Business Writing day, hosted by Peter Sansom. I love it when I go to a writing day worried that I don’t have a poem in me, and come home with the first drafts of about six. That was how it was yesterday. We worked from published poems as stimuli, as is usual for a Peter Sansom workshop. But he also sent us off round the gallery to use the art work as inspiration as well. Normally I find ekphrastic poetry—writing poetry from art work—difficult; but Peter gave us distinct tasks to do. We didn’t just sit in front of the art works and wait for a poem to arrive. In one task we were asked to just describe the artwork and see where it took us; on another to write fourteen-word poems from something happening in the artwork; and on another to find something that reminded us of an incident within our own families and write about that incident. It’s this last task that I’m going to include in my concluding poem today; about which, more later.

After the workshop, Hilary and I went to Chinatown in Manchester to find somewhere to eat. We called in at a shop specialising in Chinese art. I bought a hanger for my car: red with tassels and three plastic pigs. This weekend is Chinese New Year, and this is the year of the pig. I’m a pig, so it is going to be my year. I hope this bodes well for the PhD. I heard from my Director of Studies that the team is ready to meet and discuss my latest draft of the thesis: we’re meeting next Wednesday, 20th. I’ve been told I don’t need to prepare anything for the meeting, just bring along a copy of the critical work; so I’m hoping for good news.

Anyway, we found a table in Yang Sing restaurant and had a lovely Chines New Year meal before going on to Chapter One Books for the launch of David Tait’s latest collection The AQI(Sheffield: Smith Doorstop, 2019). David read from the collection, and Clive McWilliam—both poets are alumni of the MMU Writing School—read from his pamphlet Rose Mining (London: Templar, 2017). It was a lovely, relaxing evening. I bought, and had signed, both books; and on the ‘for sale’ shelves in Chapter One I found a hard-backed copy, still cellophane wrapped, of an illustrated Vita Sackville West book based on the Queen Mary doll’s house. It was a steal at £12.00. I’ll never be rich: I keep buying poetry!

So that’s it. I don’t like February, the end of that long haul of winter; but it has to be said, this February is being pretty impressive so far. Long may it continue. I’ll finish with a poem from the workshop yesterday. It is a fiction based in the task Peter gave us to find a poem that reminded me of something familial. I found John Everett Milais’s painting ‘The Flood’ in one of the galleries. It depicts a baby girl in a crib, with a black cat, floating downstream on a high river. Actually, it’s the very painting that one of my portfolio poems was inspired by, the poem that gives the collection it’s title, Dreaming of Pulling Teeth.Yesterday it reminded me of the sister who arrived without warning, to me at least, when I was six. My mother made her up a crib in the drawer from the bottom of the wardrobe, and I suppose the wooden crib in the painting brought this to mind. I really didn’t like this squirming, red-faced bawling usurper one little bit. Yesterday, I wrote this. I reiterate: it IS fiction!

What about this baby reminds me of you?
The hair’s all wrong—fair where yours was dark—
and the eyes are wrong—blue where yours were brown—
and the smile is wrong—you hadn’t time to smile
for red-faced crying.
The crib then, it’s the crib—
how I took yours to the banks of Whittlesey Wash
and launched you eastward to the sea.
And the cat of course—the cat was black.
I taught it tricks—to jump through a hoop,
to kick a ball, to sit on your face.
They said it was sibling jealousy.
It wasn’t.
I just never liked you.