People ask me, what will you do when the PhD is over? I’m guessing most people—not everyone, obviously, but most—do a PhD for career purposes: they want to teach in a university or move on to other research projects, change the world in some small but significant way. My motivation for PhD has been entirely selfish: this has been a personal challenge. I wanted to see if I could do it. I don’t need PhD, but I do want it; in the same way I wanted to climb Snowdon by the Pyg Track before I was fifty. I managed that as well, by the way; and Helvelyn before I was sixty. It’s what I do: set a challenge and work towards it. After PhD? I’ve no idea. Perhaps I’ll challenge myself to learn a new language, or learn upholstery, or take up lace-making or tie-dye or batik; perhaps I’ll redraft all these blog posts into a novel, a work of fiction. There will be something; what it is yet I know not, but it feels good to be contemplating life after PhD. I’m still waiting to hear from the support team to discuss the latest draft I sent them, and I’m hoping that no news is good news; at least I’m hoping it means time isn’t pressing. Just a few more months, the hurdles of final edits, binding and submitting the manuscript, the Viva Voce. Then freedom, the summit of the mountain to contemplate my next move. In the meantime I’ve been reading a book that Kim Moore wrote about in her blog last week. It’s Relating Narratives: Storytelling and Selfhood by Adriana Cavarero; translated by Paul A. Kottman (London and New York: Routledge, 2000). Kim made it sound so vital a read that I downloaded it to my Kindle straight away. She wasn’t wrong: it could have me rethinking parts of my thesis. Well, not rethinking exactly, I don’t have time for that; more embellishing. It is indeed a powerful work of feminist writing.

This week has been another little taste of life after PhD. Last weekend I was in Lincolnshire with family and friends. It was cold, but bright and crisp, exhilarating. We came home on Sunday via Lincoln. We searched for a dog-friendly restaurant for lunch; were just considering getting a take-away to eat on the lawns outside the castle when we found a tiny café about half-way up Steep Hill. It served vegan food and welcomed dogs. Lunch sorted. We left Lincoln mid-afternoon to drive home to the frozen north.

In the week James Draper posted a review in ‘aAh!’ of the Carol Ann Duffy and Friends event that I contributed to on January 14th. ‘aAh!’ is MMU’s official arts and culture student mag. I think its title is probably an acronym for ‘Arts and Humanities’. It was a lovely review—a few spelling mistakes, but hey! Apologies to ‘The Glass Aisle’ and to ‘Riggwelter’ for instance; but the substance of the review is written at the event, based on the journalist listening without chance to clarify. Here is a link to the review: https://aah-magazine.co.uk/2019/carol-ann-duffy-friends-the-glass-isle/ 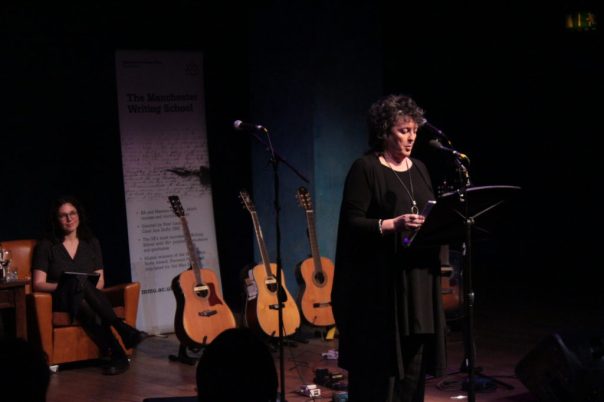 On Tuesday I woke at 3 a.m. There was snow on the roofs of the cottages opposite. Thanks to the polymyalgia medication, I couldn’t get back to sleep: I often lie in bed on a Pred high, wide awake and remembering that line from Macbeth: “Methought I heard a voice cry ‘Sleep no more!Macbeth shall sleep no more.’” Perhaps he was on Prednisolone as well, and Prednisolone hath murdered sleep. So, unfazed, I decided to use the time productively. I sent a selection of my ‘mother’ poems to Cinnamon Press’s pamphlet/collection competition. I sent to Fly on the Wall before Christmas; unfortunately I received a rejection in the New Year, but it was a very positive and uplifting rejection: Isabelle Kenyon, the editor, wrote ‘I very much enjoyed reading your work and it was a tough decision to turn your collection down… I encourage you to submit in future! I wish you all the best finding a suitable home for this great collection.’ I wish all rejections were so positive! So on Tuesday morning, at silly o’clock, I was in bed putting a collection of 25 poems together; I kissed them goodbye and pressed the ‘send’ button on them at 5.30 a.m.

At 8.00 I had an appointment for polymyalgia-related blood tests; so it was still dark when I went outside to scrape my car of frozen snow. I had intended to park at the garden centre and take the fifteen minute walk into Uppermill; but I thought perhaps a frozen canal path and my track record for staying upright might clash so I parked behind the museum like the coward I am. Bloods done, haircut done I went home and hunkered down in front of the fire and binge watched ‘The Long Song’. I read Andrea Levy’s wonderful novel some years ago, and the TV drama was a fine representation of the book I remembered. I loved the silent and crafty undermining of the slave owners by the slaves. But the cruelty, OMG; my colonial history makes me ashamed; and this is the history that made Britain ‘great’? This is the ‘control’ we want to ‘take back’? Well not in my name!

Wednesday I went into Uppermill again to meet up with Hilary for coffee and catch-up. I did walk in along the canal on Wednesday; it was freezing cold—minus 3*C, ice on the little brook behind the houses, but no ice on the canal; just lots of mallards with very cold bums. We discussed several readings we have coming up: including a twenty-five minute slot each at Writers in the Bath in Sheffield in June. We decided to split the timings, we’ll take ten minutes each, either side of the break. That way I can have ten minutes of ‘alternative mother’ poems, then ten minutes of other, more mixed work. Twenty-five minutes reading is a lot of voice! Hilary had booked our trains to Birmingham for the Verve Festival in February and for St. Ives for Kim Moore’s poetry week in April. We are two busy poets; long may it continue. Hilary is contemplating starting a PhD: I haven’t put her off then. I’ll be there to hold her hand when she needs it.

On Friday I met another friend, Joan; we ate at a lovely Mediterranean restaurant in Whitefield. The waiters kept us updated on Manchester United’s FA Cup match against Arsenal at the Emirates and we managed to catch the end of the match when we went back to Joan’s house for coffee. United won 1.3, Ole Gunnar’s eight-win run in charge. Go Utd, they look like a proper Reds team again!!

Later today I’m going to Hilary’s sister Cath’s for a late Christmas afternoon tea, a group of friends all bringing contributions. I committed to taking vegan food: I’m not vegan, I’m vegetarian; but someone else there is vegan, so I promised a vegan cheesecake and a vegan quiche. On Saturday I spent the day cooking. The quiche is tofu based and I must say it looks really rather good: 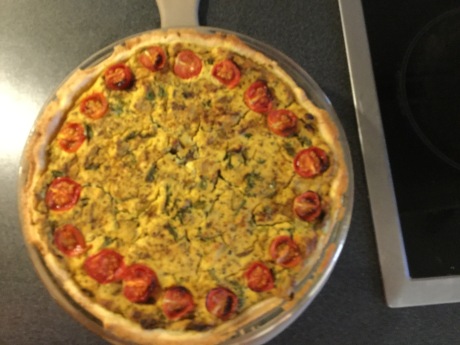 My vegan broccoli and pepper quiche

The cheesecake uses soaked cashew nuts and coconut oil; I’ve made mine lime flavoured. It ‘cooks’ in the freezer, comes out to thaw out a couple of hours before eating. It also looks good, although I have no photos. I did lick the bowl though; and it does taste remarkably like cheesecake. I’ll keep you posted. I also have to take some books for a book swap; and a ‘Secret Santa’ gift. It’s so secret even I don’t know what it is yet!

That’s it then; another week, another new experience. The poem I’m leaving you with this week is a poem I wrote last year about the fens where I grew up. It seems apposite to include it after spending a week in the Lincolnshire fens; although this is about the Cambridgeshire fens, south of the Wash. I wrote it as a place poem about the Fens; but it occurred to me that place could be ‘alternative mother’ as well as folk. So I redrafted it as ‘Alternative Mother #17’. I think it works, and it’s leading me to think I could include other places that have been significant in my life. Always good to have a poem to write!

If landscape has mountains, forests,
a river forcing its course to the sea
she is no landscape.

If goddesses reach down to touch her soil
there is nothing between their fingers
and her fecundity.

Her sky though, look at her sky,
high and wide as heaven!
She celebrates all the literature of skies,
their cumulonimbus poetry,
their war and peace.