This week has been poetry.
I slapped poetry between two slices of buttered bread,
washed that butty down with the wine of poetry.
I bathed in poetry, poetry was the sponge and the loofah
I washed my back with.
I dived into the stream of poetry,
swam with the tide of poetry
Poetry has been my sleeping, my dreaming
my waking up.
My road has been walked to the beat of poetry’s feet.

So as you can imagine, there hasn’t been much time for anything else; and in fact, my head has been so much in poetry’s space, it’s been in the wrong place for other stuff, including PhD work. I’ve heard the expression ‘I need to give my head a wobble’: this week I understood exactly what that meant. My head will be duly wobbled now that poetry has been cut down to manageable size.

Tuesday was the Saddleworth launch of Some Mothers Do…at Amie’s pub, the Black Ladd. I went for my fortnightly haircut in the morning, but the hairdresser’s wasn’t open when I arrived—first appointment—so I popped into the clothes shop next door for a browse while I waited. I accidentally bought a gorgeous, dark green velvet dress for the poetry event in the evening. It was wrapped and in my bag before I realised what was happening! It’s the hairdresser’s fault for not being open.

We went to the Black Ladd at about 5.00 p.m. Amie closed the restaurant to the public, although the bar remained open. We met up with Hilary and her husband and son; and Angi Holden and Angela Topping, who again read for their friend, Tonia Bevins, our dragon triplet. Richard drove up with our friend, Maria, from Peterborough after work, arrived about 5.30; gradually the audience started to arrive. We were unsure how many would make it: Saddleworth is on the rural edge of Oldham, public transport is non-existent after about 6.00 p.m. so a car is a must: the pub began to fill with friends, neighbours, stanza members. It was lovely that so many people came to help us celebrate the book. We started the poetry reading at 7.15,  had readings from the book in the first half, called an interval to refill glasses about 8.00.  Amie had said she would put on ‘some nibbles’; in the event she filled a table with lovely finger buffet stuff, quiches, samosas, bhajis, macaroons and all manner of ‘nibbles’. it was a lovely surprise. The second half was given over to an open-mic; three of my Stanza members signed up, and Angi and Angela took five minutes each to read their own work. Hilary and I finished off with a couple more poems each from the book. A lovely evening, as they say, was had by all. Thank you so much to Amie for hosting the evening, and to Mo and Jill who helped her; and to all the wonderful people who gave up their time to come. I expected to be so buzzed up I wouldn’t sleep after; but in fact, the excitement of two launches in one week along with wine mixing with residual co-codamol for the shoulder thing and I was out like a light soon after we got home, slept like a baby. 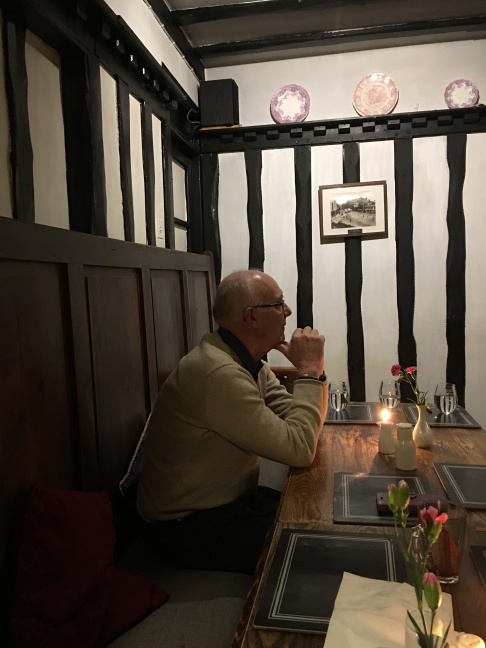 Bill being a very attentive member of the audience

Wednesday was spent preparing to come away on Thursday. I’m writing this from my bed in Silverdale in the South Lake District, where I’m staying with Hilary and Linda, another poet friend. Hilary and I travelled up together on Thursday for yet another poetry book launch, this time for the Beautiful Dragons anthology Watch the Birdie, launched at Leighton Moss RSPB reserve. It’s an anthology with poems by 70+ poets all inspired by birds on the Watch List of endangered species. Yes there are rare-ish birds on the list: the red backed shrike, the dottrel; but more worrying, there are everyday garden birds like sparrow, song thrush, starling. A recent report by the WWF points out that the world has lost 60% of its animal populations in the last forty years! That’s a staggering and shameful figure. Human activity, modern farming practices, habitat destruction, climate change all contribute to ensuring our wildlife is critically endangered. Watch the Birdie recognises the threat and has attempted to do a small thing to redress the balance. John F Kennedy said, ‘One person can make a difference, and everyone should try.’ This anthology is poetry’s way of trying to make a difference. The book launch was at Leighton Moss RSPB reserve and the book will be sold in the gift shops at several RSPB reserves in the North West, all profits going to support the preservation work of the RSPB. The launch was another lovely evening, a gathering of about fifty poets, old dragons and new, old friends and new; about thirty read their poems. Beautiful Dragons is the brain-child of Rebecca Bilkau, the editor, and it’s lovely that so many poets sign up to the various anthologies she dreams up. Friday’s launch had a real reunion feel: good poetry, wine, wonderful cheeses and cake, and a silly folk song about humans flying in a ‘flour sack cape’ from Rebecca’s husband, Michael: that’s what I call a brilliant night. On Saturday morning we went back to the reserve for a guided walk, which was lovely. We saw a bittern, which in the world of twitchers—bird watchers—is quite a coup apparently: they wait with binoculars raised for years to see one; we just turned up and there it was!  We saw squillions of different varieties of duck; we saw a large white egret; we saw a pair of cormorants fishing for food; we learned of the bearded tit, which isn’t a tit at all really, and which changes its diet in the autumn and winter from the abundance of insect life in the spring and summer to the seeds of the reed beds, but needs to eat grit to store in its crop to use as a mill to grind the seeds to a pulp so that they can be more easily digested. Evolution, eh! Survival of the most imaginative! After the walk around the reserve, Hilary, Linda and I all joined the RSPB, making a small contribution to the wonderful conservation work they do.

The cover of the Beautiful Dragons anthology Watch the Birdie

I’m going to include my Birdie poem this week. I chose the fieldfare to write about, because I remember it from my growing up in the Cambridgeshire fens. It’s a member of the thrush family, a winter visitor from Scandinavia. It arrives, and lives, in large flocks, returning to Scandinavia in the spring to breed. In the fens its name is pronounced ‘felfer’, and research revealed it has several dialect names, both here and in its native Scandinavia. The poem is an acrostic, a form that takes the name of the bird and uses its letters as the first letter of the lines, so that the bird—in this case FIELDFARE—is spelt down the page. I tried to disguise the acrostic by allowing the lines to run on, limiting the end stops. I hope I’ve been successful. WordPress doesn’t like the formatting of poetry: alternate lines in this poem should be tabbed in once; I’ll leave you to work it out. 😦

Feature of the fenland fields
in winter, you arrive
in large flocks, flying overhead
to your migrant shelters.
Egregious thrush-cousin of song, mistle,
blackbird: you never joined their choir.
Large and several, you bring a little of Scandinavia
to snow-covered hills and woodlands.
Daring aeronauts, take off, soar, show us
your red capes, grey rumps, black tails.
Felfer, fallowfarer—I see a nickname
as an expression of affection
and you are indeed well-loved—
felfit, felfire, feldifire.
Remember, though, where you found succour
in this theatre of ice and snow:
eat well, entertain us with your tuneless soliloquy
then exit stage right,  pursued by the spring.