This has been a good week. To coin one of Trump’s favourite hyperboles, this has been the best week in the history of weeks!

On Sunday I was working on my thesis. I have cut and pasted a lot, which is painful but necessary. I’ve put all the cuts into an out-takes file for future use if I need them. I put some into a rather long footnote about the historical male domination of poetry publication. I’m showing how difficult it was for women to be anything but domestic slaves. No wonder post-natal depression happened, when women could completely lose their personhood in wifedom and motherhood. Anyway, I’m chipping away at the thesis again, like a word sculptor, giving it the correct shape, honing it. And re-reading Carol Ann Duffy for the poems I’ll add into the mix. She writes so well on having/being a mother.

On Monday my daughter asked if I’d like to go to Peterborough on Tuesday to visit a friend who’s having a hard time at the moment. Of course I would, so that took one of my working days, but it was worth it. I made up the slacking by working Monday evening, sorting out my reading sets for Wednesday’s launch of Some Mothers Do…I settled on a mix of poems from the book and poems that fit the theme of the book. On Tuesday, I was awake at 3.00 a.m. I had a poem going through my head, a message to insert into the ‘thank you’ card for Rebecca Bilkau, editor at Beautiful Dragons Press. I lay in bed trying to form it into a cinquaine, a five-line syllabic form; that’s the kind of creative insomniac I am. Eventually, I sat up and wrote that poem down. By then it was too late to go back to sleep. I emailed it to Hilary Robinson for feedback, then I got up and got ready for Peterborough. Amie was collecting me just after mid-day, so I had the morning to practise my two reading sets for Wednesday. I had two ten-minute slots, so that’s about five poems in each half. I like to stick to timing as closely as I can, it’s the professional thing to do. Poets shouldn’t need to ask, ‘how much longer have I got?’ or ‘do I have time for another one?’ If you prepared properly, you should know the answers to those questions. So I practised the readings to a stop watch. The timings include any introductions you want to give for the poems, so I drafted a few notes to keep intros to a concise minimum. Both sets were just about ten minutes each. My voice was fading by the end, a sign of the nerves I always experience before readings. Don’t let anyone tell you it’s easy to stand up in front of a room full of people and read poetry, it isn’t. It’s painfully self-revealing and full of ‘what-ifs’: what if they don’t like this poem, what if they question why they came in the first place, what if they have tomatoes and cabbages hidden about their persons and they start throwing? But a poet friend, Clare Shaw once told me, if you don’t believe in your poems how can you expect the audience to believe in them? So that’s why I practise so conscientiously: I need to read them like they’re the best poems in the history of poems—sorry, it’s becoming a habit—while making eye contact with the audience to keep them engaged.

We got to Peterborough about 3.30 p.m. in time for our friend coming home from work. We sat in her house amongst boxes of belongings—she’s moving at the weekend—and ate Chinese take-away out of the containers because she only has one plate that isn’t packed, and we chatted a lot. I hope we helped to cheer her up a little. Relationship breakdown is a hard thing to survive; and I know from personal experience that it helps to have the love and support of friends. It was nearly midnight when we got home.

Wednesday was up there among the best days of my life. I was awake early again, couldn’t sleep for the excitement—like a child at Christmas. I made a little nest for the hatching dragon I found in Wales, a gift for Rebecca. I heard back from Hilary about my cinquaine: she liked it, so I wrote it into a thank-you note and put it into the dragon’s nest with the egg. I practised my reading sets again, edited the intros to make them even more concise. I took some pampering time getting ready for the launch, changed shoes about six times before making a decision, then went out to meet Hilary and her family. Hilary was carrying a big, flat bag she’d made to transport the cake she’d baked for the launch: photo later. We went to Bunderbust to eat, which was lovely because it was Diwali, so a lovely party atmosphere. After the meal we went to the Portico library for the launch. Oh my, what a lovely room, full of old books and knowledge, an awe-inspiring room. My friend Joan, an avid Manchester United fan, had chosen the launch over the match against Juventus—greater love hath no woman! My ex-Reception teacher, Shirley Johnson was there with her lovely husband, which was a wonderful surprise: so many friends and poets in the audience, and all there for we dragon triplets. I gave Rebecca my dragon egg gift, which she loved; and when she read my little poem there were tears in her eyes. The readings went well; Hilary and I opened the event with a joint reading of one of my poems, a ‘coupling’ which takes some factual lines on a subject and intersperses them with poetic responses. Hilary read the factual bits, I read the poetry bits. It was a good opening. I read my first set, followed by Hilary; then Angi Holden and Angela Topping read on behalf of our dragon triplet and their friend, Tonia Bevins who sadly died in the summer before she could see this project completed. Her friends did her proud.

We took a break to replenish glasses and finally eat the lovely cake Hilary had brought. After the interval we had a second round of readings; Hilary and I signed books then some of us retired to the pub downstairs for a celebratory drink. Such lovely people, poets; so supportive as a community. While we were in the pub, Mark Pajak, the poet who organises the Royal Exchange series of Carol Ann Duffy and Friends poetry events, asked me if I’d like to read at the January 14thevent, to promote the book. He can only accommodate one reader in the timeframe, and Hilary read there quite recently. Well, we thought that over for a full two seconds before agreeing. The only barrier was, we were booked to read in Halifax on the same night. Hilary got in touch with the organiser of that event to request a rethink and he’s agreed to find us an alternative date. So, CAD & Friends it is then. Bring it on. I’ll read some poems from all three dragon siblings at the event. Details of the excellent CAD & F series here: https://www.royalexchange.co.uk/whats-on-and-tickets/carol-ann-duffy-friends-2018

Here are a few photos of the launch at the Portico Library: 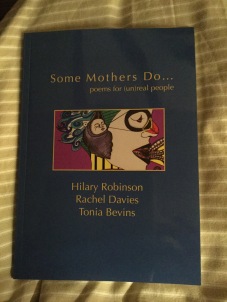 Still life with Hilary and Cake.

Me, looking much more serious than I felt on the night. 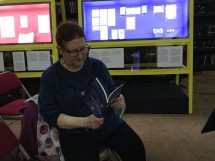 Manchester United fan, Joan, missing the Juventus match to be at the launch.

On Saturday, Hilary came to my house and we worked out how to use the headphone mic and small blue-tooth amplifier Amie bought us for the Saddleworth launch on Tuesday: 7.00 p.m. 13thNovember at the Black Ladd on Buckstones Road—OL1 4ST if you feel like setting your satnavs and joining us for the evening. The bar will be open, there’ll be nibbles, and a roaring fire in the grate; so come along and help to make it a good night. We worked out how the mic works. We set up the amp on a shelf in the lounge and sent Bill downstairs to the garage with the mic and we heard him clear as a bell, even at that distance. Fantastic. Having sorted that out, we signed some books for people who have requested copies but couldn’t make the launch. We feel like real poets, with book signings and everything! We went for coffee and a bite at Albion Farm in Delph, which is getting ready for its Christmas Festival. Yup, the Christmas market is open in Manchester and Albion Farm is getting festive. Deck the halls…

Finally, here’s the poem I wrote for Rebecca. it’s a cinquaine: a syllabic five-line poem, 2, 4, 6, 8, 2 syllables respectively. Our book is the first in a planned series of DragonSpawn pamphlets for poets who have written for Beautiful Dragons anthologies but haven’t yet had a full publication of their own. It’s Rebecca’s way of giving new poets a leg-up in the publication race. This poem recognises our appreciation and awe at being the first-spawn of the Dragon Mother. I told Hilary that Rebecca had tears in her eyes when she read the poem and Hilary said, ‘why? It wasn’t that bad, was it?’ And that’s why I love my dragon sister so much.