It’s 4.30 a.m. I can hear the rain on the roof. Even by my entrenched insomniac standards, I have had a poor night’s sleep. And Bitch Week is over for another year. I am not happy.

We had a good week: workshops, poetry, international travel and friendship. We started our workshops on Sunday, the day we discovered the dishwasher at the cottage wasn’t working. Penny rang the owner who said she would send a local maintenance man: she lives in Chester so couldn’t deal with it herself. We asked that he visit in the afternoon as we were busy with poetry in the morning. Polly prepared the writing activities for Sunday, which included some pieces we could only write using questions. That was interesting, and influenced later tasks when questions were no longer a requirement.  Unfortunately, after the first activity, the ‘local maintenance man’, Mike, turned up to investigate the problem with the dishwasher, completely disrupting the flow of the workshop. He hummed and hah-ed in the kitchen for ten minutes and declared ‘no idea what’s wrong’. A local appliance repair man would come the next day. Back to the poetry. A ‘treasure hunt’ to look for clues as writing prompts was fun; the hunt took us into the garden on a lovely summery day.

In the afternoon Penny, Hilary and I went for a walk to visit three or four small coves, including a sandy beach. Penny bought us all ice creams. It was whipped ice cream, which I’m not too keen on, but the ice cream man assured us it was whipped Cornish ice cream and the best in the land. It wasn’t, it was whipped ice cream: frozen emulsion paint. Thank goodness Penny asked for 99s; at least the chocolate flake was OK. We walked down to the sea: Penny and Hilary paddled but it was too cold for me. It was my turn to cook dinner on Sunday; I made a pastitsio with lentils instead of meat. It was good. In the evening we read the writing we had drafted at the workshop in the morning. There were some good pieces, worth working on. We were ‘plum tuckered’ as they used to say in the old westerns, and we were in bed by 9.30.

Monday: Penny’s workshop. She prepared a variety of activities using poetry as prompts. For one, she chose runner-up in the National Poetry Competition as stimulus for our own writing:  Caleb Parkin ‘The Desktop Metaphor. It was good to read it together, and interesting to use it to inspire writing of our own. It’s not an easy form to emulate. Her last activity involved a little children’s book she had bought us all about being naughty. We really enjoyed the poems we wrote based in our analysed ‘naughty’ types. On Monday afternoon, after the morning workshop, we went into Trearddur for lunch at the Black Seal, a lovely restaurant close to the sea. We chose a window seat; the food was lovely and we decided to revisit on Wednesday evening when we planned to eat out.

On Monday evening we had dinner cooked by Hilary: a vegetable chilli, rice, tortilla chips and home-made guacamole. Delicious. After dinner we spent a pleasant evening reading from collections of published poets we had brought with us. Lovely to read Greta Stoddart’s  Alive Alive O, among others, as I was due to introduce her to Poets&Players on Saturday afternoon; it really whetted my appetite for that. Don Paterson’s 40 Sonnets was in the mix; Helen Ivory’s The Secret Life of Clocks and Rita Dove’s Mother Love. There were anthologies too, giving us a wider access to poets. It was a really enjoyable evening. That night I didn’t sleep well at all. I was still buzzing with poetry, plus excited for Tuesday’s trip to Dublin.

We were up early: a taxi was booked for 7.30 to take us to the ferry port. We were practically the first there. A bus transported us to the ferry then stayed on board to transport us to the Dublin terminal at the end of the voyage. We found seats at a table by the window and went off in search of breakfast. We found an abandoned newspaper on a table, and Polly picked it up to read. She tore out the puzzle page for me to do the sudoku page: the easy one I completed in one-touch sudoku; the difficult one I messed up completely and didn’t have a rubber to put right my mistakes. Hilary and I were just starting on the word puzzles when a man came and asked us if we had bought the newspaper. We said no, we’d found it on table. Turns out he had left it there to reserve the table. What? Who does that–a newspaper to reserve your place? Newspapers are always left on public transport. He wanted it back. He was thoroughly unpleasant, despite our apologies, took his newspaper back, including the torn-out, half-completed puzzle page, and glowered at us every time our paths crossed on the remaining trip. We just put on our best feminist, confident ‘you-can’t-intimidate-us-you-tosser’ attitude, which pissed him off even more. I half hope he loves doing sudoku and I’d spoiled his day.

We pulled into Dublin–do ships ‘pull in’?– at just after midday: it was a sailing of about 3.5 hours. We caught the express bus to the city centre–€5 return. Our first visit was to Trinity College to visit the Book of Kells. Wonderful. The mediaeval illustrations and symbolism, the amazing manuscript. It is a fantastic exhibition, if you are ever in Dublin. My favourite, though, was the much smaller Book of Mulling, written in the late 7th Century in Irish Minuscule Script. Beautiful. The Long-room Library, upstairs from the exhibition, is fantastic; something like 2,000,000 books in there. As Polly said, if you started reading them when you were 5, you couldn’t get through them all if you lived to be 100.

Hilary and me through the Brian Boru Harp, which became the national symbol of Ireland. Photo by Polly Atkinson.

From Trinity College we made our way to the Molly Malone statue on Suffolk Street. She is indeed beautiful. She stands opposite O’Neill’s Pub, famous haunt of political dissenters, including W B Yeats. We had our first pints of Guiness and ate a late lunch. From there, Polly and I took the short walk to the Post Office. This was the site of the Easter Rising, 1916. The building was badly damaged in the uprising, and was rebuilt in the 1920s, reproducing the original building. It was good to be there, at the site of the political struggle which ultimately resulted in the partition of Ireland into the Protestant North and Catholic South. It did lead to peace as well, until the eruption of The Troubles in the sixties. We took lots of photos, then went to visit the dapper James Joyce statue across the road. 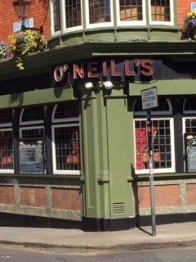 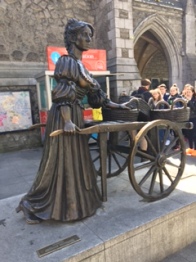 Hilary and Penny decided to visit the Temple Bar shops instead of coming to the Post Office and we agreed to meet back at O’Neill’s at 5.30 for another Guiness before getting the bus back to the ferry terminal at 6.45. Polly and I were standing on Westmorland Street looking to the map, finding a route to O’Neill’s when a lovely woman stopped to ask if we needed help. She was emblematic of the wonderful warmth we took from the Dubliners all day. We chatted for about fifteen minutes: she was a librarian and told us about some of Dublin’s ‘hidden gems’ to visit if we come again. They include a library built by a Catholic for Catholics at a time when libraries were only available to academics and Protestants, which generally meant the same thing. Apparently the library has ‘cages’ for the readers to prevent them from stealing the books. Definitely on the list for my next visit. This woman was also a poet and helps to organise the Listowel Poetry Festival, which includes a poetry competition; too late for this year, but one to look out for next spring. You can find details of the festival here:

The ferry ride home was calm and comfortable. We put in to Holyhead just about midnight and our lovely taxi driver was waiting for us as he said he would be. We were home by 12.45 a.m. having had a fantastic day.

Wednesday we’d given ourselves a free day to recover from our trip. I did some PhD reading: Juliet Mitchell Feminism and Poetry; and I wrote a long entry in my journal about the Dublin trip. I sat in the garden at the cottage for part of the morning, but it was so hot I had to escape the sun and go indoors. We were blessed with the weather all week. In the evening we ate out at the Black Seal as planned, a lovely meal; in bed by 9.30 to catch up on sleep we missed the day before.

Thursday, Hilary had planned writing activities, practical and fun ones involving black-out poetry, among other things. She kicked off with one of those ‘automatic writing’ pieces that always produce surprises. She and I went to Morrison’s in the afternoon and had lunch while we were there: an afternoon tea involving two quarter sandwiches, a scone and butter and a pot of tea for £2.50, how cheap is that? I filled my car up in Tesco’s filling station to save time on Saturday morning. Polly cooked a delicious biryani, Hilary and I added veg samosas and onion bhajis we’d bought in Morrisons, so we had a real Indian feast. We just chatted through the evening.

Friday was my workshop. I prepared an Oulipo workshop with activities involving N+7: identifying the nouns in a poem then exchanging them for the seventh following noun in the dictionary. We also rewrote one of the short poems we had written earlier in the week, using words that didn’t contain an ‘e’, challenging but fun. Relaxation, packing up to leave in the morning, then a chippy tea and chatting late into the night. It was a good day.

Saturday we packed the car and came home. I gave Polly a lift because she was coming to Poets&Players with us in the afternoon. Penny drove home alone: she couldn’t make P&P, she was visiting in Hebden Bridge. We left the cottage at about 10 a.m. and dropped Polly off in Chorlton about 12.30. Hilary and I had lunch at the Whitworth Gallery with the P&P committee members and the poets, Greta Stoddart and A B Jackson. Cheryl Pearson joined us later. Oh, my what a wonderful afternoon. The ‘players’ were Liam Byrne (saxophone) and Andy Hulme (guitar). Cheryl Pearson read from her about-to-be-launched pamphlet Oysterlight. A.B.Jackson was a consummate performer of his work. I had the pleasure of introducing Greta Stoddart, who was wonderful as ever. It was a splendid afternoon of music and poetry, our last event until the autumn. We are starting to think Arts Council bid for next year’s funding. How quickly that comes around.

It was good to be home after a week away. The packing is all waiting downstairs to be dealt with, there will be laundry, there will be ironing, the downside of going away; but there will also be poems to work on. I say, bring on next year. I can’t wait.

Here’s the poem I redrafted using no words that contain the letter ‘e’. The original was the poem I wrote in Penny’s workshop about my analysed ‘naughty type’: I was Miss Catastrophe–I can’t think how that happened!–so the title had to change for a start.