This week I have finished my sonnet corona for the creative element of the PhD, worked on the critical element of the PhD, been to two and a half poetry events, met up with lots of poetry friends and acquired a new-to-me car. Even by my standards it’s been a full-on week. I feel sorry for people who say they’re bored now they’re retired. Look at your options: boredom isn’t one of them.

On Sunday I got started late on my work. I made a huge plateful of pancakes with berries for breakfast and took my time eating them while I watched Andrew Marr so by the time I started, my head wasn’t in the right place for the critical element. Instead I prepped my work timetable for the week and then concentrated on the creative element. I wrote the fifth sonnet for the corona, in the daughter’s voice. Later in the day I had added the sixth, this one in the mother’s voice. I still wasn’t entirely happy with the two distinct voices, but I can work on that when I get the first drafts done. I left the sixth one on a good line for rounding back to the first line of the first sonnet to complete the crown. I’m reticent to tell you I abandoned work in the afternoon to watch Manchester United beat Chelsea 2-0 at OT, because it shows you the limits of my commitment to work. It was a fantastic match. In the evening I booked a hotel in York for next Wednesday. My daughter, Amie, had bought tickets for Danny Baker’s ‘From Cradle to Stage’ but her partner couldn’t make it so she asked if we’d like to go instead. I booked us a studio apartment in the centre of York for £80.00 for the night: I call that a bargain.

Monday was a big and dedicated PhD day. I worked on the Selima Hill chapter, putting all my disparate redrafted bits together in a whole. It’s taking shape. At 4.00p.m. I met up with Hilary to go to Amy McCauley’s writing workshop at Leaf on Portland Street. This turned out to be the ‘half’ a poetry event I mentioned in my opener. We decided to get off the tram at Exchange Square and eat in a small, family run Italian ristorante there. Unfortunately, we lost track of the time, and when we picked the track up again, it was ten past six and the workshop had started at six; so we decided to workshop our own poems, take a leisurely coffee then go home. So sorry, Amy, we played hooky from your workshop: another first because, much as I hated school, I never once skived off then. When I got home, I booked train tickets to York: I found out there is no parking at the hotel I booked. York is very aware of its environmental responsibilities and discourages traffic in the city centre with excellent park-and-ride facilities. So we are going by train and taking the walk from the station when we get there.

Tuesday I was at my desk by 8.15 for another good day at the Hill chapter. I have a problem with the theoretical input even now. If I put too much theory into my argument, it feels like digression from what I’m really wanting to say; too little and the writing feels undernourished. Do I put explanations in footnotes or in the body of the work? Oh, this academese has always been a foreign language to me. I’ll decide at the next redraft, when I have it all put together in a finished draft of the whole chapter, I think. I’ll have spoken to Antony and Angelica again by then, so I’ll talk to them about it. After three hours of work on the Hill chapter, I changed tack and wrote the seventh and concluding sonnet for the corona. I printed off the whole thing and read it aloud, always a good way to listen to any inconsistencies in the rhythm etc. I was quite pleased with it as a first draft. It still needs some work on the distinct voices of mother and daughter, perhaps some idiom to distinguish them, but I’m pleased overall. It’ll be interesting to see what Jean Sprackland thinks of it when I send it to her next month. I’ve got time to do a bit more redrafting before then though.

Thursday it was the Manchester launch of the latest Beautiful Dragons anthology at
No. 70 Oxford Road. Hilary had organised the venue, in one of the lecture theatres there: it was intimate and comfortable. There were about fifteen of us ‘dragons’ there: other launches are taking place around the UK. But it was lovely to meet up with poet friends and share in the community of poets again for a celebration of some wonderful work. The anthology is called The Bees’ Breakfast. It has a poem celebrating every county, and a few cities, in the UK. I chose my native Cambridgeshire as my inspiration and wrote a short poem about the fens, centred around the man who became my stepfather and who was fenland through and through. I’ll post it at the end of the blog. You can find Beautiful Dragons publications here:

Please check it out and support them if you can: Rebecca Bilkau is the editor and works unbelievably hard on these collaborations. Some fantastic poets are involved as well, so you’ll get real value for money if you decide to buy. After the launch we all spilled out into the Thirsty Scholar for a celebratory drink. The community of poets served me yet again: Anna Percy and Rebecca Bilkau talked to me about my PhD work; they were really supportive and I thank them for it: we all need some support to keep us going. Rachel Mann also offered to read my sonnet crown, bless her. I love my poetry friends.

Friday was the pick-up day for my new car. I’ve been running on adrenalin all week thinking about it: not just about having it, but actually buying it. In all my half a century of adulthood (?) I’ve only bought four cars on my own and I find it extremely stressful: the knowing if I’ve done the right thing, if I really need a new car, if I’ll need the money for something else as soon as I’ve spent it, if, if, if…But at 2.00 p.m I went to the Pentagon dealership and took possession and oooh! it’s loverly! Here is a photo of the red, glittery bits that show in the paintwork when the sun shines on them: I know, a really blonde reason to buy a car, but just look at them and tell me you wouldn’t have been beguiled too: 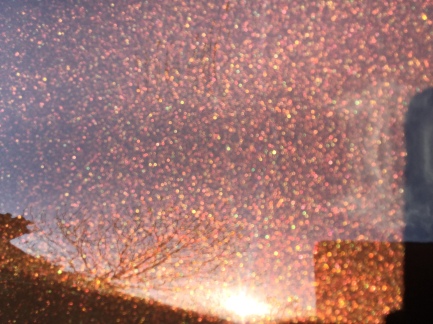 This all brings us round to yesterday, Saturday. I had a wonderful day of poetry. It started with a workshop at the Whitworth Gallery on Oxford Road organised by Poets&Players. Steve Ely ran the workshop: it was based around the poetry of Emily Dickinson. We read, discussed and wrote poetry. I have a couple of embryonic poems from the workshop which I’ll be working on at home. Steve’s workshop was well organised, interesting and enjoyable. After a communal lunch with the committee and the competition winners, it was our competition celebration event. Oh my, what fantastic poems Michael Symmons Roberts had chosen as winners: Sharon Black in first place with ‘Post Op’; Ian McEwan in second with ‘Poem with this cow in it’; and Pam Thompson in third with ‘My life as a bat’. It was fantastic that all the prize winners could attend, especially as they came from the south of France, Bedford and Leicester; and they all read wonderful extra poems to go with their winning work too. I had the great pleasure of introducing Michael Symmons Roberts to our audience; and Li Liu, dressed in her wonderful costume creations to enhance the music, provided the ‘player’ element with her cello and Bach Cello pieces. It was a fantastic afternoon in wonderful surroundings of the south gallery, overlooking Whitworth Park, on a lovely summery day: 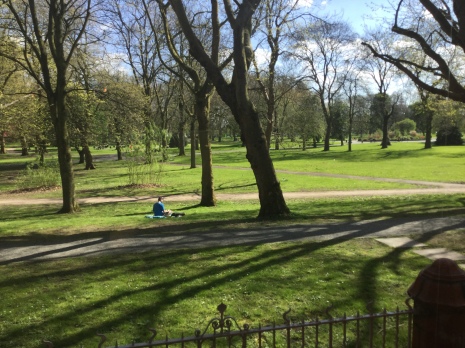 A lovely day and a wonderful week. I love my life. Here’s my poem from the Beautiful Dragons anthology The Bees’ Breakfast.

Sometimes dreams can be nightmares.

He wanted most of himself to be buried, to become
an enrichment of the fenland soil he loved so much,
his heart and lungs to be thrown in Whittlesey Wash
to feed the eels he knitted his nets for.

Oh, he was generous. He gave me some peonies once,
dug up from his garden. He shook the soil off though—
that soil’s worth three thousand pounds an acre he said.
I looked for the smile but there wasn’t one.

One night his skeleton grew out of the earth like a myth.