This week has been all about poetry and PhD; so the best kind of week. I spent Sunday and Monday trying to  do some ironing to get things ready for a few days away.  I couldn’t do much, my back was too sore, so I kept having to take time out with the hot water bottle; but I did iron what I needed to pack my case. On Monday I bought a fabulous new weekend bag using a gift card birthday present from my sister. I found the bag in TK Maxx, all bright coloured flowers and frivolous. It was this bag I packed for going away.

From Tuesday to Friday I was in Kent’s Bank, Grange over Sands at Abbot Hall Hotel for a poetry carousel organised by Kim Moore. Penny Sharman collected me at 9.00 on Tuesday morning and drove us both there. It was a lovely day, but a drive slowed by traffic on the M62 which is being upgraded to a ‘smart motorway’; I always imagine a motorway having to pass its entry exam when I read that. Anyway, we arrived in Grange about 11.30 and went for a coffee. I bought us lunch as a thank you for the lift. We got to Abbot Hall about 1.15 but couldn’t book into our rooms until 2.00; so we sat in the garden with other poets enjoying the lovely sunshine. I love these events where I meet up with old poetry friends and meet new ones: the community of poets is a very special thing.

The carousel started with introductions at 3.30. Do you understand the concept of a poetry carousel? I’ve only heard of them through ones Kim has organised and I don’t know if she invented the concept or not. Anyway, the course participants are divided into four groups and four wonderful poets all run one workshop each, once for each group. This carousel had rides by Clare Shaw, Billy Letford and the Dutch poet Tsead Brunjia, and of course Kim herself.

The first workshop ran from 4.00-6.00 on Monday afternoon; I was in Tsead’s workshop first. Tsead writes in Dutch and Fresian, a northern-Nederlands dialect. He began by reading us some of his favourite Dutch and Fresian poetry. We had translations into English, which were then read by course members. But it was lovely to hear them read in their original tongue, even though I didn’t understand them. The musicality of them was strange and enticing on the ear. We then had forty five minutes to write a response to one or two of the poems. I reread the poems and chewed my pen for about thirty of those minutes, having no idea where a poem was going to come from. Finally, with just ten minutes to go I had a vision of a wombat I saw once in the spotlight of a midnight drive in Tasmania. I called on that experience to respond to a poem about becoming an animal. I’m quite pleased with it; I always write best under the pressure of deadlines.

After our evening meal Tsead and Billy performed their own poetry for us in the lounge. They are very different poets, but both readings were masterclasses, confident and entertaining. A wonderful evening. I was glad to take to my bed though, the full-on day had taken its toll on my sore back.

The next day, Wednesday, after enough breakfast to feed a family of five for a week, we went to our second workshop. I went to the one led by Kim, ‘Illuminating Moments’. It was concerned with those moments in our lives that don’t seem significant at the time, but assume a kind of significance later in life. We read poems on that theme by a variety of published poets and then wrote our own poems in return. I came away from Kim’s workshop with three poems worth working on. In one of them I explored a moment in my classroom as a nine-year old pupil when the teacher humiliated a child by trying to get him to say ‘the’ properly; the child substituted ‘th’ for ‘v’. It was painful but I didn’t realise its significance until last Wednesday. When I was a teacher, and particularly after I became a headteacher in a primary school, people often asked me what you need to be a teacher; I think they had in mind maths and English GCSE for instance. But I always said ‘remember what it feels like to be a child’ and I realise now, that response came from watching poor Barry Bedford’s humiliation when I was just a child.

On Wednesday and Thursday afternoons the course tutors held one-to-one tutorials for any course members who wanted them, a generous use of their time. But I opted not to partake: I spent my afternoons in my room, catching up on PhD writing or reading. I got a fair amount of writing done either in those afternoons or in the early mornings before breakfast. I also read a great deal, all PhD reading: is there any other kind at the moment? So on Wednesday afternoon I had cuddles from my hot water bottle, a lovely way to relax the sore back muscles, watched some Olympics and worked on my PhD. I met up with Penny and another friend, Louise, for dinner. On Thursday afternoon I decided I couldn’t waste all that lovely August sunshine by staying in my room, so I took an hour with my hot-water bottle and writing indoors then went out to the garden with a cappuccino and sat in the sunshine with my Kindle and Jessica Benjamin’s The Bonds of Love. I’ve read it before, it’s a good read; I’ve put it on my Kindle ready for my hols in Minorca next week, but I made a start on the first chapter about intra- and inter-subjectivity and the ‘master/slave’ analogy of domination and submission. Fascinating stuff. I was joined on my garden bench by a very friendly robin, a young one I’m guessing, who sat on the back of the bench very close to my head and let me get a lovely photo of him/her: 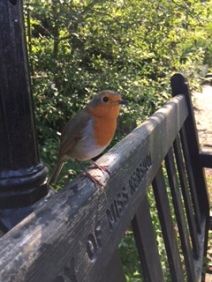 After dinner on Wednesday we had readings by two published poets, Helen Farish and Helen Fletcher. I much preferred the work of Helen Farish: her presentation was confident and engaging, her poetry thoughtful and original. Helen Fletcher has just had a first collection published and she is less confident in her presentation. This detracted from her poetry for me, a valuable lesson to learn for anyone reading their poetry to an audience: show the audience you really believe in your work or you can’t expect them to believe in it either. I know from personal experience what nerves can do to a poetry reading, so I sympathise with her.

On Thursday my morning workshop was with Clare Shaw. Her workshop was inspired by natural disasters and I wrote three more poems here; one of them I have adapted for my blog poem this week, about which, more later. Thursday evening, after dinner, Kim and Clare read their poetry. Both very accomplished readers of their own work, it was an engaging evening. It was rounded off by Sarah Lightfeather Dimock, a course member, and her guitar-playing husband, giving us a duet of country music. It was brilliant, Sarah has a wonderfully mellow voice, deep in her throat, warm as maple syrup. I was ready for my bed by 10.30. But of course, I couldn’t sleep: good poetry and performance does that to me. So I watched some Olympics, had cuddles from HWB and made myself a hot chocolate. Still no sleep, so at 2.30 a.m I gave up trying and wrote a Spelks poem for our Spelkerama next week.

Friday morning we packed up, checked out and went to our last workshop. Billy’s workshop was based in journal writing. We talked about journals and what we put in them. We wrote a typical journal entry, then were asked to write the same entry in the voice of a ‘character trait’. I, appropriately, was given the scenario of someone who had had a fall (!) and lost their capacity for experiencing fear. It was a good way to get us to think of voice in our work. We read lots of different poems and discussed how these all related to ‘journal’. Interesting. After a last lunch we hit the road for home. Friday was very wet, so it wasn’t a pleasant journey: lots of standing water, motorway spray and ridiculously inappropriate (dangerous) driving. It was nice to be home and be mollycoddled by Bill for the evening.

On Saturday I made sure my annual review file was up to date for the meeting on Monday: I included in it the latest poems I’ve been writing to the project and the latest version of chapter 1 to date. I also wrote two more Spelk poems for next week’s Spelkfest. Our task this week was to respond to ‘Body’, a poem from Alice Oswald’s collection Falling Awake. This is a wonderful poem about the actual moment of death of a badger; wonderful imagery, original and surprising phrases like ‘the simple heavy box of his body’ and ‘the grin like an opened zip’. Not for nothing has Oswald been called our greatest living poet. Anyway, I had already written my first response while I was away. The second and third activities involved taking lines from the poem and using them as the title of a new poem of our own. I was gripped by the wonderful line ‘with the living shovel of himself’; I changed the gender of the pronoun to enable a poem for my portfolio: you have to take your opportunities where you can. Perhaps they will become blog poems in future, but not this week: they haven’t been seen by Spelks yet so they are under wraps until Tuesday.

The blog poem this week is one I wrote while I was away. I wrote it on Clare’s ‘natural disasters’ workshop, a memory of my dad being called out of the house one night in 1953 when King’s Lynn was flooded by the North Sea. I have imagined it was my mother who took my dad’s place: she probably would have done if she had been born in an era when women weren’t chained in the home. So here it is, my mum driving through the dark to rescue flood victims in 1953 King’s Lynn:

A midnight knock at the door.

My mother, somewhere on the edge

of my sleep-fogged ears talking to a voice

I don’t know, my father fussing

joins other women from the village,

drives into the night to Kings Lynn,

then just a way marker for me en route

from water, has tonight been inundated

by the North Sea surging along the mouth

of the Wash, calling in the debt.

My mum worked all night, rowing,

whose homes were toys bobbing

Of course, I knew nothing of this then.

I just put my thumb back in, turned over,

was asleep again before she’d left the house.